Word of the Week: ZomBee

ZomBee: A honey bee that has been parasitized by the “zombie fly,” Apocephalus borealis. The word is a portmanteau of zombie (a reanimated corpse; originally from West African words meaning “fetish” or “god”) and bee.

“ZomBee” appears to have been coined by the researchers at ZomBee Watch, a citizen science project sponsored by San Francisco State University and the Los Angeles County Museum of Natural History that is tracking the spread of ZomBees, According the project’s website, “Fly-parasitized honey bees become ‘ZomBees’ showing the ‘zombie-like behavior’ of leaving their hives at night on ‘a flight of the living dead’.” (Watch a video.) 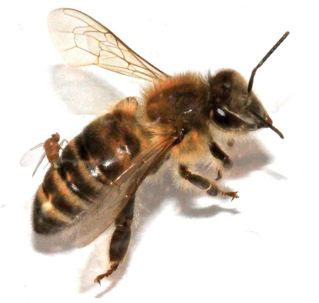 Apocephalus borealis on the dorsal area of a honey bee, laying eggs in its host. Image from PLOS ONE.

“Zombie flies” are suspected to be a cause of Colony Collapse Disorder, first reported in 2006 and said to be responsible for the disappearance of nearly one-third of the honey bees in the United States. Without honey bees, many food crops cannot be pollinated. A research paper published in PLOS ONE in January 2012 provided documentation that Apocephalus borealis, previously known to parasitize bumble bees, “also infects and eventually kills honey bees and may pose an emerging threat to North American apiculture.”

Posted at 07:56 AM in Neologisms, Portmanteaus, Science, Word of the Week | Permalink

Speaking of zombies...The 400+ species of the Cordyceps fungus zombify ants (and many other insects) in temperate and tropical forests. Terrifying. Sir David Attenborough narrates: http://www.youtube.com/watch?v=XuKjBIBBAL8