San Francisco’s Would You Believe? bar, at Geary Boulevard and 11th Avenue, has a name wrapped in a question wrapped in three typefaces, none of which I could identify. 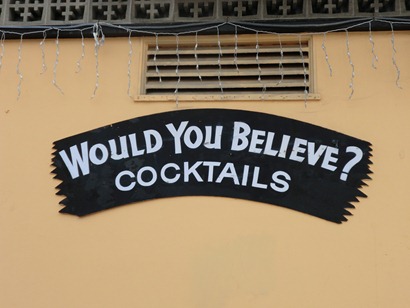 The 11th Avenue side of the bar. I’ve decided to call this typeface “Adventureland Bold.” 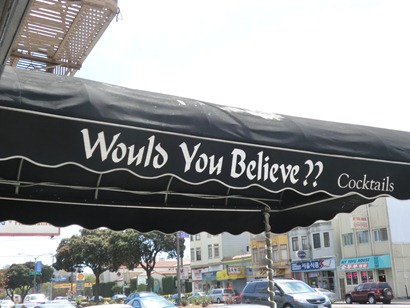 The awning on Geary gets a second question mark. This looks like Aladdin or a similar Middle-East-y font. 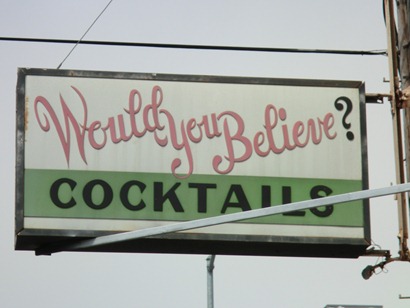 Fancy script—let’s call it “Sugar Plum Princess Birthday”—paired with an austere, vaguely Deco sans-serif face. I’m picturing a tipsy tootsie on the arm of a pinstriped stockbroker. The sign is mounted above the awning on Geary.

I searched in vain for clues about the origin of this Richmond District bar’s rhetorically questioning name. Something to do with Get Smart, the TV spy spoof of the 1960s, maybe? “Would you believe…” was Maxwell Smart’s catchphrase on the show, and it’s also the name of a Get Smart fan site.

Here’s what learned about the bar from Yelp:

Posted at 07:40 AM in In the Wild, Naming, Restaurants, San Francisco, Signs, Television, Typeface | Permalink