When “Jones” is the first word in your brand name, shouldn’t you know how to conjugate the word properly?

That seems not to be the case with Jones New York, the namesake brand of a Fortune 500 retail conglomerate. 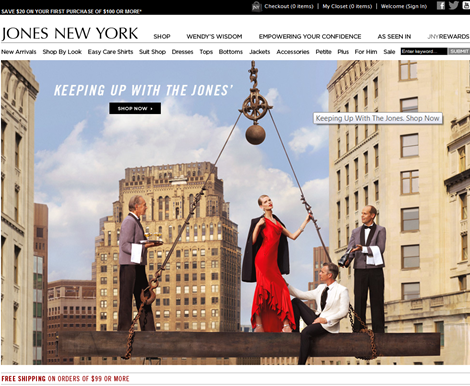 The same image and headline appear in a two-page ad in the September issue of Vogue (pages 190-191). Lavish styling, pricey photography, expensive ad buy. Too bad a few dollars weren’t left over to pay a proofreader.

Here’s the thing: The idiom is “Keeping up with the Joneses.”** Joneses is the plural of Jones, and it follows the rule about regular plural formation: If a word ends in a pronounced S—as opposed to the silent S of some French names like “Dumas”—add -es.

But whichever guide you follow, a possessive noun has to possess something. We might say, for example, that we’re keeping up with the Joneses' circus skills. In the ad, however, nothing is being possessed.

Enough? Enough. After all, I still have 770 pages of the Vogue September issue to plow through. Who knows how many usage goofs lie ahead?

** According to the biographer of the novelist Edith Wharton, “keeping up with the Joneses” was coined in reference to Wharton’s very wealthy aunt, Elizabeth Schermerhorn Jones.

I actually cringed when I saw that. It could be worse, though: I've seen "Jone's" before.

In traditional grammatical terminology, verbs are conjugated; nouns and adjectives are declined.

Shouldn't it be "the Joneses’circus skills" anyway?

Jenne: Aarrggh -- of course it should! I've fixed it.

Inexcusable! I noticed Pheevr's quibble too -- but how many readers would read "decline" properly in your sentence?

I saw the apostrophe, but it still made me think of a drug habit. Considering those sizes, a jones might be needed for a good fit.

I'll just chime in here -- late -- to note that "conjugate" also struck me. Way too many years spent leafing through "501 Spanish Verbs," I suppose. :-)

Augh! I saw this same mistake in another JNY ad in a magazine the other day and couldn't believe it. It might be judgey of me, but when I see such glaring errors in print I lose respect for the brand.