« The Magic of Spellcheck | Main | Word of the Week: Hooliganism »

(This is the second of two posts about Title Nine, the sporting-goods company for women. Read the first post here.)

I’d been thinking about Title Nine for a few days before I visited the Berkeley store, because I’d recently received an email from the company that looked like this: 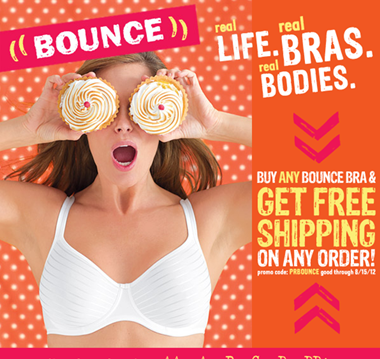 Bounce—jiggle lines and all—turns out to be the name of Title Nine’s everyday bra brand.

It’s an odd name for a bra brand, to say the least.* And it’s especially strange coming from Title Nine.

Some background: Title Nine built its reputation on selling sport bras that have been tested for various activities and assigned “barbell” ratings. The more barbells, the more support. There’s a four-barbell bra called the “Bye-Bye Bounce Bra”; another is called the “Bounceless Bra.”  The maximum-strength bra—a five-barbeller called “The Last Resort”—is said to “completely eliminate bounce.”

So why is the non-athletic bra brand bounce-positive? Where’s the consistency? Or is the name a joke I’m not getting?

Each bra style in the Bounce department has a name, and many of the names are, yes, jokey: Get Busted, M.F. (not what you’re thinking), Full House, A Bolder Holder. (Who else remembers “over-shoulder boulder holder”?)

Then there’s the Things Unseen Bra. 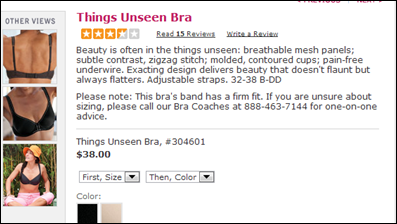 I’m a nonpracticing Jew and no expert on Scripture, but I do recognize “things unseen” as a New Testament catchphrase. It appears—as “things not seen” in some translations—in Hebrews 11:1 and in 2 Corinthians 4:18, and it refers to faith (“the evidence of things not seen”).

If this is a dog whistle, it’s a pretty irreverent one. (I’ve seen no sign of Bounce or Title Nine having a religious mission. Christianity isn’t part of the T9 brand manifesto as it is for, say, Sierra Trading Post, Chick-fil-A, and some other well-known US companies.)

Then again, I notice that Bounce also carries an Amen Bra—for A cups only, haha—and a skimpy, secular Blessings Top. And the company’s bra-fitting experts are Bravangelists. So maybe what we have here is a little wink-wink, nudge-nudge—some tittering, if you will—about “uplift.”

* Yes, I know that Procter & Gamble makes a Bounce brand of clothes-dryer products. Not a concern: it’s a variation on the but-that’s-a-car-name non-issue. Different categories; zero conflict. (But see also Jessica’s observation in the comments section.)

Posted at 09:59 AM in Naming, Religion, Retail, Underwear | Permalink

I'm not entirely sure there's NO conflict with the P&G dryer sheet, but I'm conservative that way (and in virtually no other way ...)

But having spent a lifetime trying to minimize bounce, I agree that their adoption of "bounce" as the name of the line is strange when their sports bras' names seem to be anti-bounce. I don't get it.

based on the photos, the Bounce line is targeted to women who really have a blast eating fattening foods while in their skivvies.

To me "bounce" is about men looking at breasts, which seems antithetical to the original goals of this company. But maybe they know what they're doing, know how to sell bras.

It's a little-known fact that all of the actresses in Bergman's Through a Glass Darkly wore Things Unseen bras.