During the last month or so I’ve been seeing a specific type of abbreviation in brand names. Here are four examples: 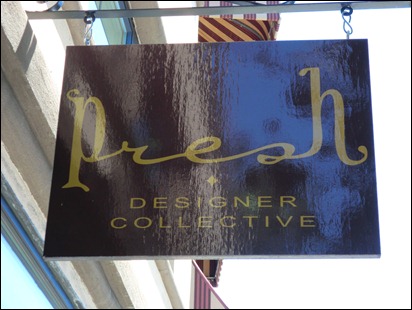 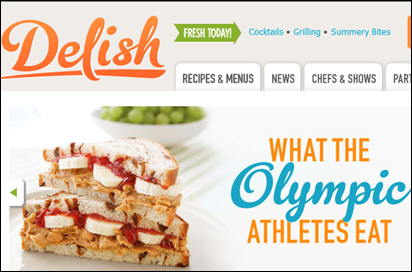 Delish, a cooking site launched in 2006 by Hearst and MSN. 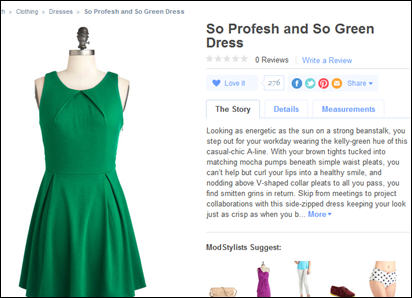 “So Profesh and So Green Dress* from Modcloth.

FASHtrack, a blog at HollywoodReporter.com.

These names have at least three things in common. They’re truncations—from “precious,” “delicious,” “professional,” “fashion,” and “nutrition” respectively—that end in /sh/. (FASHtrack is also a pun on “fast track.”) They sound casual (cazh?), conversational, and snappy. And they’re targeted at female, or mostly female, audiences. I don’t think the last point isn’t coincidental: Not only does the “soft” -sh ending evoke femininity, but this particular style of abbreviation has been associated with young women’s conversation for a long time.

How long? Well, take a look at these lyrics:

Don’t mind telling you, in my humble fash
That you thrill me through, with a tender pash,
When you said you care, ’magine my emoshe
I swore then and there, permanent devoshe …

They were originally sung by Adele Astaire, sister of Fred, in the Broadway musical Funny Face, and later (and more famously) by Ella Fitzgerald. They’re from the vamp to “’S Wonderful,” which was written in 1927 by Ira and George Gershwin.

There really is nothing new under the sun. In fact, I wrote about this very subject almost exactly six years ago.

UPDATE: Via a comment, Robert Lane Greene reminded me of his February 2012 post in Johnson, The Economist's language blog, about this type of sound change. Definitely worth a read.

* I can’t resist sharing the copy on the So Profesh and So Green Dress, because it sounds like a combination of machine translation (translaysh?) and drunk-texting:

Looking as energetic as the sun on a strong beanstalk, you step out for your workday wearing the kelly-green hue of this casual-chic A-line. With your brown tights tucked into matching mocha pumps beneath simple waist pleats, you can’t help but curl your lips into a healthy smile, and nodding above V-shaped collar pleats to all you pass, you find smitten grins in return. Skip from meetings to project collaborations with this side-zipped dress keeping your look just as crisp as when you began your morning, and you might feel a promotion coming on as a result of your awesome energy!

Note to copywriter: You “curl your lips” into a sneer, not a smile.

Posted at 08:36 AM in Abbreviations, Fashion, Naming, Retail, Slang | Permalink

The word fesch has been used in southern German/Austrian dialects at least since the middle of the 19th century. It means "pretty," "stylish," and is, according to most sources, derived from the word "fashionable."

Not just that; they're all forms in which a [t] or [s] sound in the root has become a -sh sound when followed by a suffix like -ious, -ion or -ial. In each case the original -i- colonized the preceding consonant.

An analogous thing happens with the [z] that mutates to a zh-sound in in cazh, plezh, uzhe, etc. (Some careful Brits still pronounce these words like caz-ual, but for the rest of us are more cazhual.)

This seems to tickle people, cutting words off right at this particular mutation. I did a bit on it here.

Lane: Many thanks for the comment and the link to your post! I'd read it back in February but neglected to bookmark it.

I've updated my own post to include a link to yours.

I find that Cole Porter, in a song called "Hey, Good-lookin'", in a 1943 show called "Something for The Boys", wrote the lines

I also notice that Hank Williams's well-known "Hey good-lookin', whatcha got cookin'" song seems to owe a lot to this one.