Professional hockey—minor league, but hockey nonetheless—is returning to San Francisco this fall. Which explains the presence of this billboard in North Beach (Columbus at Filbert). 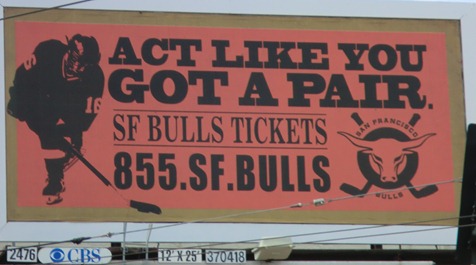 But it doesn’t explain everything. And neither does the FAQ section on the SF Bulls website. So I’m going to woman up and do my best to answer your questions.

The Team Name, Part 1.  As far as I know, there’s no history of “Bulls” teams in the Bay Area—Chicago has that particular honor. So I surmised that the name was inspired by the team’s home rink, the Cow Palace, which opened in 1941 as a venue for livestock expositions and the Grand National Rodeo. The Cow Palace is not actually in San Francisco: it’s just south of the city and county limits, in Daly City. (It was originally called the California State Livestock Pavilion; according to one story, while it was still being built, during the Great Depression, one critic sniped that while people were starving, money shouldn’t be spent on “a palace for cows.” The name stuck.) “The San Francisco Cows” was evidently out of the question. But as San Francisco Chronicle reporter Peter Hartlaub wrote in October of last year, “You’ll sooner see a bull in San Francisco than a circumcision ban in Dallas. It’s a poor name, coupled with a logo that looks like a Carly Fiorina attack ad.” Hartlaub suggested seven improvements on “Bulls,” including The Bullitts and The Rock. Nevertheless, I’m sure the headline writers will have loads of fun with “Bulls Hit.”

Then when we were downtown [sic] at Pier 39. There was a crowd of people this past spring. It was packed, and the sea lions were playing. We were talking to some people there, and someone says “A male sea lion is called a bull.” And we said “That’s a little tougher.” That’s how the Bulls came up. Then there was the connection with the Cow Palace. That’s how it developed.

The Team Colors. It’s all orange and black—San Francisco Giants colors--on the poster, but according to a Wikipedia entry the official colors are “old gold,” orange, black, and white. Gold and orange have symbolic significance locally: gold for the Gold Rush, which transformed San Francisco from a provincial backwater to a regional capital; and orange for the International Orange paint on the Golden Gate Bridge.

The League. The Bulls will play in the hitherto-unknown-to-me ECHL, which when it was founded in 1988 was called the East Coast Hockey League. In 2002 the West Coast Hockey League went out of business, and the ECHL took in a bunch of teams from Alaska, California, Nevada, and Idaho. There are some not-bad team names in the league, including the Orlando Solar Bears, the Bakersfield Condors, and—my favorite—the Florida Everblades. But all the names pale in comparison to roller-derby team names like the Traverse City Toxic Cherries, the Arkansas Killbillies, and the Taco Kickers.

The Ad Slogan, Part 1. No question that “Act like you got a pair” has the requisite bad-assitude for hockey. For starters, there’s the down-market grammar—like, not as if; you got, not you have or you’ve got. (I’ll get to “a pair” in Part 2.) If you doubt that got can be inflammatory, read Fitch O’Connell’s recent column for the Visual Thesaurus (subscription required): O’Connell was told by a teacher that got “isn’t a word” and by his grandfather that “it’s an Americanism.” (Both had been misinformed.) I’m not sure, though, who’s being addressed in that imperative statement. The fan? The aspiring team member? (Open player tryouts will be held in September.) The city of San Francisco generally?

The Ad Slogan, Part 2. “A pair” has been slang for “testicles” since … well, I can’t tell you. The OED doesn’t include the reference, although it does tell us that “a pair” has meant “women’s breasts” since at least 1919. In hisOfficial Dictionary of Unofficial English—an indispensable resource—Grant Barrett antedate s “grow a pair” to this 1994 Usenet citation: “My only response to diablo is to sack up and grow a pair.” In the Bulls billboard, “a pair” surely refers to the manly fortitude required to play hockey. But I’m not sure about “act like.” Maybe fans just need to pretend to be macho. Or maybe the target audience is women. Or maybe it’s “a pair of tickets,” and as long as you act as though you have them, you can get through the gate.

“A pair” was used more effectively in an ad campaign for last year’s 50/50. 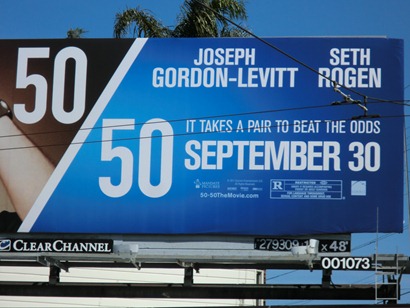 Here “a pair” has three overlapping meanings: machismo; the two friends portrayed by Gordon-Levitt and Rogen; and the “two-of-a-kind” meaning from cards (reinforced by “…to beat the odds”).

I also learned that Oakland once had a pro hockey team called the Seals.

The logo made me think first of Texas, not Chicago, fwiw...