« Names in the News: Lifelike | Main | How Livemocha Got Its Name »

Just in time for Life-or-Death Week here at Fritinancy, Karen sent me this photo of a display at Dick's Sporting Goods in Natick, Massachusetts: 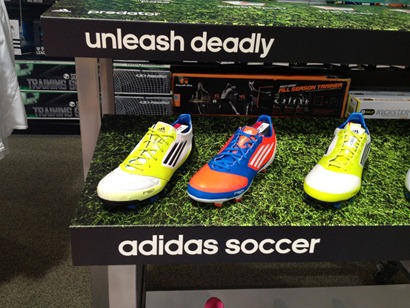 Deadly? Those candy-colored shoes look pretty cheerful to me. The lethality is more overt in an Adidas video that shows the shoes (“boots” in the UK) being shot from artillery.

But what about the slogan, “Unleash Deadly”? Rest assured  that the grammar is deliberately off. Yes, transitive “unleash” normally takes a noun as object (“Unleash the hounds!”). Despite its -ly suffix, “deadly” is an adjective here, which makes “Unleash Deadly” parallel in structure to another famously iconoclastic slogan, Apple’s “Think Different.” 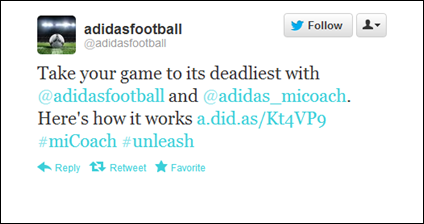 Adidas is using the #unleash hashtag in social media.

To those of you who are wringing your hands over this evidence of the decline and fall of “good grammar,” here’s a gentle reminder: Advertising is supposed to command your attention, not lull you with predictability. “Unleash the Predator LZ” or “Unleash Deadly Force” would be grammatically correct but undistinguished. “Unleash Deadly”—clipped, memorable, ominous—makes you look twice.

And, as you’ve noticed, it does that by incorporating the D-word—formerly off limits in branding, now a hot trend.

Posted at 08:11 AM in Advertising, Anthimeria, Death, Grammar, Slogans and Taglines, Sports | Permalink