Exhibit A: Cablevision is helping to market OMGFAST fixed wireless broadband Internet and telephone service in Florida. OMGFAST was formerly known as Clearband. 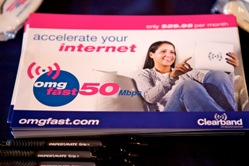 From the Fierce Cable report:

Earlier this month, the company changed its name to OMGFAST, incorporating the slang abbreviation for “oh my god” that is often used in text messages. On July 3, Cablevision subsidiary Rainbow MVDDS Company filed a trademark application for the brand “OMGFAST,” which the company said would be used to provide “Internet access via wireless broadband,” according to the U.S. Patent & Trademark Office. RMVDDS listed the address of Cablevision’s corporate headquarters in Bethpage, N.Y., in the filing.

Exhibit B: The controversial diet book Six Weeks to OMG, was published in the US earlier this month. The author is Venice A. Fulton—the nom d’OMG of Paul Khanna—who, according to the blurb, is “a nutrition expert and personal trainer” who designed the regimen for “his A-list clients.” Fulton/Khanna originally self-published Six Weeks in the UK. 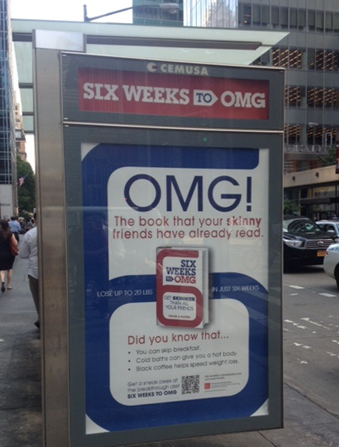 An excerpt from the hilarious review by John Crace in the Guardian (UK):

Let’s go. But before we do, I should just mention the A and B words. And now I have mentioned anorexia and bulimia, let’s forget about them. Because the first thing you are going to do is skip breakfast, do an hour of exercise – just thinking will probably be exhausting enough for some of you – and drink five double espressos. Can’t you just feel all that fat being purged? Nice feeling! Now I want you to have an ice-cold bath. Stay in as long as you can manage. Those doing the Quake [the most challenging version of the diet] should aim for two hours. That way your legs will get frostbite and have to be amputated. OMG. No more cellulite dimples for you, babykins!

Exhibit D: A sign in one of the front windows of Euromix, an international food shop in my Oakland neighborhood. I wrote about Euromix in 2008. 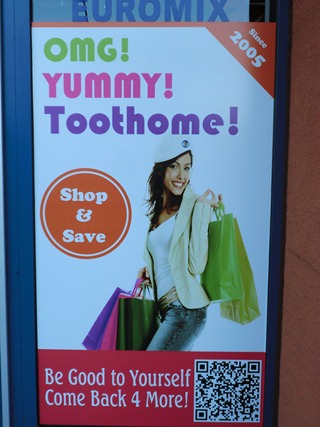 I think they mean “toothsome,” but I still want to turn it into an imperative: “Eat our beans and toot home!”

I can’t resist sharing a photo of the sign on the other side of the door: 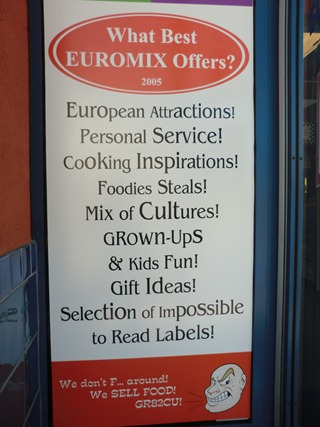 To which we reply: 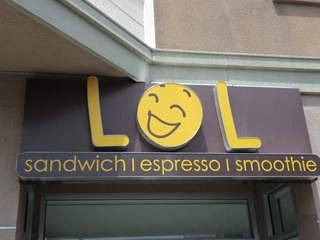 The US Patent and Trademark Office lists 85 live trademarks with “OMG,” including OMG Tax; OMG! Onion Made Goodness (chip dip); OMG lubricant (“Make it an explosive night”); OMG! Oatmeal Made Great; OMG I So Need a Glass of Wine or I’m Going to Sell My Kids (“an exclusive virtual gathering of Domestic Goddesses”); OMG … It’s Gluten Free; OMG Object Management Group (registration filed in 1991, several years before the txting abbreviation took off); and OMG OJ. My favorite so far is OMG Old Man’s Garage in Rainbow City, Alabama.

Maybe you go on an OMGFAST to reach OMG? Now I have all the info I need in the event a client approaches me with an AWESOME mark that contains OMG.

I loves me some "toot home!"

Considering the Euromix poster further, is it a Russian source that messes up the English? If so, you may have to come up with a new word to add to Spanglish and Chinglish.

Does this mean using OMG is now simply part of the general lexicon? Or do you think, because old people now use it (OMG! I'm one of those old people!), it's outdated and sounds as ridiculous as saying, "I'm jiggy with it" (which, for the record, I have never said, thank you very much).

So much to enjoy! I don't want to to think too much about OMG lubricant but love the domestic goddesses' name for their gathering.