Remember the Starbucks “Let’s Merry” slogan from the 2011 holiday season? It was no fluke. Recently I’ve seen two new examples of “Let’s X” branding, in which X = a non-verb enlisted to play the part of a verb.

Tanqueray has a new campaign that doubles down on the anthimeria. The campaign slogan, “Tonight We Tanqueray,” turns the brand name—legally speaking a modifier, as in “Tanqueray gin”—into a verb. And one of the ad slogans, “Let’s Tonic,” turns a noun into a verb. 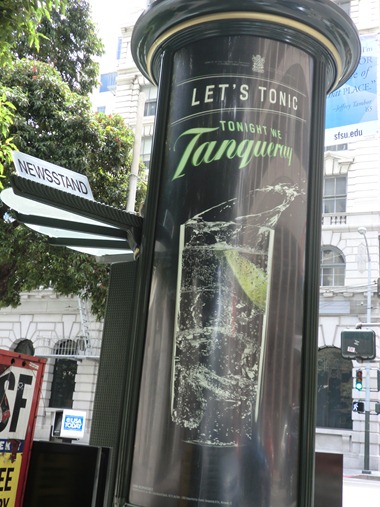 Shot from the window of my car in San Francisco (Columbus near Washington).

The campaign comes with a manifesto:

Tonight. Tonight we off the cellphone, retire the email. And save it for another day. We slow it down, drag it out and downshift day into night. Then throw in a few limes, a few rocks, maybe toss in some juice. A wink. A toast. Give her cheek a little love. Tonight we raise our glasses and let them kiss.

Note the Mafia-style use of “off” as a verb.

“Tonight We Tanqueray” reminded me of those much-parodied “Tonight, Let It Be Löwenbräu” commercials from the late 1970s to the mid-1980s. Here's one from 1979.

The jingle was sung by the late Arthur Prysock, “the Barry White of beer commercials,” according to one YouTube commenter.

A second Tanqueray ad instructs “us” to “Grab the Night by the Junipers.” Here’s a version of the ad on the website. 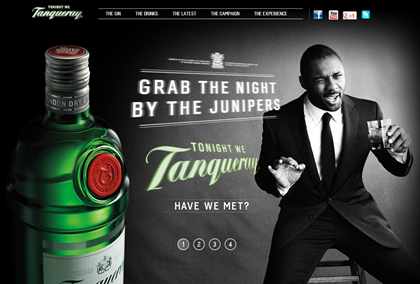 Juniper berries are, of course, a key ingredient in gin. And “Grab X by the horns” (or, more crudely, “by the balls”) is a well-documented idiom. But I wonder how many passers-by will figure it out.

The idiom was a lot clearer in the marketing materials for the 2004 film Dodgeball: 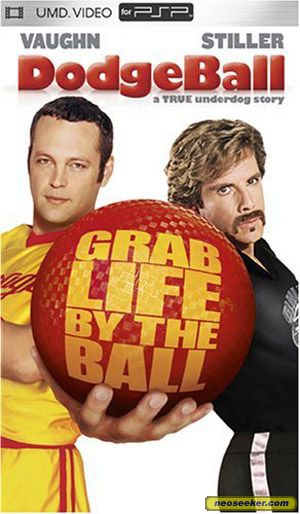 In Australia and Europe, the tagline was “Grab Life by the Balls,” plural.

The second example of “Let’s [non-verb] X” comes from Amsterdam-based Let’s Pizza, which has been dispensing hot pizza via vending machine to customers in Europe for about three years. Which surprised AdFreak: “How did Europe get these things three years before us, anyway? The universe got that backwards.” Let’s Pizza kneads the dough, forms a round, adds tomato sauce, layers toppings – and then bakes it all in front of your very eyes. There are no frozen pizzas here; Let’s Pizza is a mini-pizzeria that’s open 24 hours a day!

And here’s the news you’ve been waiting for: PizzaMarketplace.com reported last month that Let’s Pizza will introducing its first machines to the U.S. market later this year. A ten-and-a-half-inch pizza will cost about $6 and deliver 646 calories. In Europe, that probably translates to “dinner for the family”; in the U.S. it will probably be marketed as “personal size.”

I love to see such clever copywriting, and of course, your observations are wonderful, too. I think my favorites are, "… off the cellphone," and "Grab the night by the junipers" (which are, after all, little balls).

A wise philosopher once marked that 'verbing weirds language'.