Word of the Week: Strass

Sources agree that “strass” was named for its inventor, but not on who he was. The OED and Encyclopedia Britannica identify him as Josef Strasser, an 18th-century Viennese goldsmith. Wikipedia doesn’t mention Josef: it claims strass was named for an 18th-century Alsatian jeweler, Georg Friedrich Strass. Maybe both Strass and Strasser solved the problem simultaneously. In any case, the eponym is satisfyingly apt: Strasse means “street” in German, and strass is often used to create a pavé (paved) effect.

“Strass” (or French “stras”) has long been used in Europe to describe artificial gemstones, but its more-recent popularity in the United States appears to be linked to shoe designer Christian Louboutin, whose crystal-paved pumps—which can cost north of $3,000 a pair—have been a red-carpet sensation. Accordingly to the official Louboutin Twitter account, the designer has created a pump that’s strassed all over—even on the famous red sole.

I try to stay up-to-date on such things, but I admit that “strass” was new to me until I read a post by Dustbury about pavé women’s pumps from the shouty shoe brand HERSTAR that celebrate professional sports teams. Here’s the Los Angeles Lakers edition: 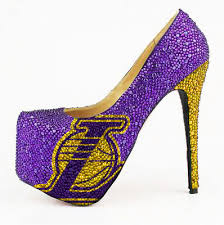 Yours for less than 10 percent of the cost of the Loubies!

The copy is as ostentatious as the ornamentation (punctuation sic):

Encrusted, dazzling, and intensely mesmerizing with every step, these elite pumps command a presence of their own. Fully hand strassed in luxurious, hand selected Middle Eastern crystals, then offset by a sky-high 6” heel and 3" internal platform; these glittering heels glisten on the court and off. They are simply magical to behold.

And that is how I learned that “strass” can also be a verb.

Other examples from around the Internet:

“I strassed my own wedding shoes using genuine swarovski crystals and saved a TON of money.” (Wedding Wire)

“Sophie and Ava’s strassing service is perfect for the doll who wants a lot of bling for a lot less money than it would cost for the retail price!” (Shatterproof Glass Dolls)

The “strass” category on Etsy depicts some non-footwear options, too.

Early artificial diamonds were rock crystals gathered from the Rhine River. But “rhinestone” to describe those crystals or their imitations postdates “strass” by half a century: the first appearance of “strass” in an English-language publication was in 1820, while “rhinestone” didn’t appear until 1871. (The German Rheinkiessel, or “Rhein pebble,” first appeared around 1780.)

Urban Dictionary has a different definition for “strass”: “Stress that is so annoying that it’s a huge pain in the ass.” Which, admittedly, might result from wearing a pair of six-inch stilettos.

Posted at 07:23 AM in Fashion, German, Jewelry, Shoes, Word of the Week | Permalink

Very interesting! Next question: Why in the world is "paste" another name for such faux gems, when their composition seems like the opposite of pasty?

@Jan: I had hoped to include an answer to the "paste" question in this post, but I hit nothing but dead ends. Could there be a step in the process that involves some sort of soft goo? Or was it a corruption of "impostor"? The OED doesn't say.