Word of the Week: Dark Money

“Dark money” is a new twist on “soft money”—unrestricted political contributions used by political parties to elect candidates. (“Hard money,” by contrast, is regulated by the Federal Election Commission and limited to $5,000 per year per contributor.) This sense of “soft money” has been around since at least the early 1990s. The first usage I found of “dark money” is in an October 2010 report by the Sunlight Foundation, a nonpartisan, nonprofit organization dedicated to government transparency. The report, “Follow the Dark Money,” was published just before the midterm elections. It asserted in its first paragraph:

As much as $110 million has been pumped into the elections so far by political groups that have yet to disclose their donors, reports submitted to the Federal Election Commission show, and this “dark money” from unknown contributors has impacted 168 congressional races across the country.

That money flood was the direct consequence of a pair of 2010 U.S. Supreme Court decisions—Citizens United v. Federal Election Commission and SpeechNow.org v. Federal Election Commission—that rewrote campaign-finance law to allow unlimited contributions from individuals, unions, and corporations as long as those expenditures were “independent” (not directly connected to a candidate or party).

The majority opinion in Citizens United stressed the importance of “prompt disclosure of expenditures” to “provide shareholders and citizens with the information needed to hold corporations and elected officials accountable for their positions and supporters.” In practice, however, disclosure has been notably absent.

Mother Jones, the nonprofit investigative magazine familiarly called MoJo, picked up the “dark money” tag in 2011 and in April 2012 turned it into a regular beat covered by reporter Andy Kroll. Another reporter, Gavin Aronsen, writes the “This Week in Dark Money” post for the magazine’s Political Mojo blog. Mother Jones has devoted two issues, including the current one, to the dark-money theme. 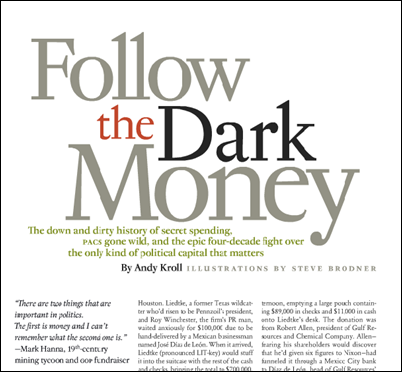 MoJo’s co-editors, Clara Jeffery and Monika Bauerlein, talked about dark money in a recent interview with Bill Moyers. At about 3:58, Moyers asked about the origins of “dark money.”

Moyers: What were you after there? Why that term?

Jeffery: We were searching around for a metaphor, and we had some celestial inspiration, as it were. Because like dark matter, which is something that’s in the universe and we know is very powerful but we don’t really understand it and we can’t really see it and we’re only beginning to be able to measure it– that’s true of dark money. Especially since Citizens United, there’s just so much unregulated, undisclosed money flowing through SuperPACs and their 501cs. To paraphrase [Arizona Senator] John McCain, very often we don’t know where the money’s coming from, who it’s going to, what its purpose is—it’s just out there. We can see the effects of it later, but we don’t know in anything close to real time what’s being raised and spent.

Dark money is “two-thirds to three-quarters Republican,” Bauerlein told Moyers. “Both sides can play this game,” she said, “but Republicans have an inherent advantage in that their natural constituency has a lot more money.”

For more on 2012 campaign lingo, see my Visual Thesaurus columns published May 16 and May 23.

Posted at 06:42 AM in Economy, Lingo, Magazines, Politics, Word of the Week | Permalink

Another use of the "dark arts" is in railroading.

When territory along a train route is not controlled by signals, that stretch is referred to as dark territory.