« On the Visual Thesaurus: Bikini and Beyond | Main | Junk and Pride »

To Sleep, Perchance to Zzz

Remember when Z was the official letter of hip-hop and all things outlaw? As in Bratz, Starz, and Boyz II Men? And how that got kind of tired? Now Z has reclaimed its role as the official symbol of sleep, as we see here. 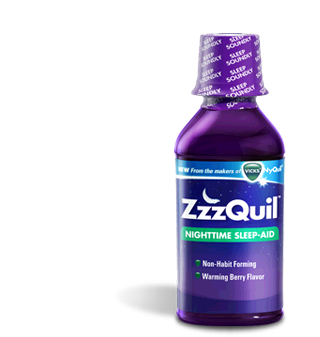 ZzzQuil is a new nighttime “sleep aid” from Vicks, the maker of NyQuil cough medicines. According to the website, “ZzzQuil contains diphenhydramine HCI, which is a big word for a small compound that helps you sleep.” The flavor is called Warming Berry, which is obviously very different from Cool Berry.

There are no pronunciation tips on the site, so it’s going to be tough to ask for it by name, as cats used to do with Meow Mix. Is it zee-zee-zee-quil, zees-quil, or [buzzing sound]-quil? In the UK is it zed-zed-zed-quil?

Multiple Zs have been an onomatopoetic representation of snoring, and by extension of sleep, for many decades. The OED’s first citation is from 1924. “Catching some Zs” to mean “getting some sleep”—a U.S. colloquialism, according to the OED—dates back to the early 1960s.

Here’s another brand that uses multiple Zs to indicate restfulness:

The E-Zzz Sleep pillowcase is made of cotton flannel and has a flap that drapes over your face. The company says the product “solves a problem, fulfills a need, makes sense, looks and feels good, is new and unique and makes a dramatic difference in your comfort and the quality of sleep.” Probably not recommended for insomniacs with a suffocation phobia.

There are at least four live trademarks in the U.S. for Z-Tech, but I found only one for ZZZ Tech: ZZZ Tech Sleep Lab, in Sturbridge, Massachusetts. “Catch your ZZZ’s – count your blessings,” reads a caption on the website. 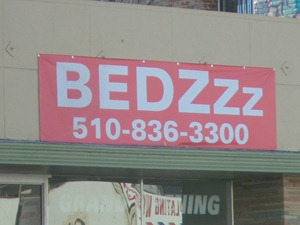 Bedzzz, on Telegraph Avenue in Oakland, appears to be dormant. The declining Zs may be a tipoff.

ZzzQuil via The Impulsive Buy.

Posted at 07:27 AM in Naming, Pharmaceutical, Retail, Trends | Permalink

I would pronounce it "SnoreQuil," on the grounds that "SnoreQuil" is fun to say. (It's like "snorkel," with added /w/ goodness!)

Many years ago, the campus bookstore sold a bumper sticker that read:
It's JOHNZZZZZZZZZ Hopkins
But the administration made them take it off the shelf.
:-)

Look at package label. Diphenhydramine is clearly on it right up front.

Why in the print and TV ads has that line been edited out ?
Is that false advertising or just withholding info?