On one level, Bootie Babe, a nail polish and fragrance brand, is a playful pun on “beauty.” On another, it’s one more example of the assification of American branding. (See my previous posts on this subject: “Booty Pageant,” “Bottoms Up,” and “Cheeky!”) You could say the callipygian packaging is cute … or lewd. 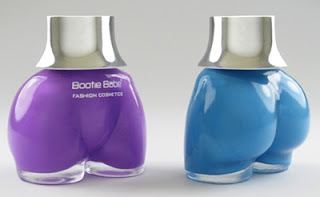 The company, which is based in San Francisco, was founded in 2011 by Mark O’Hara, whose previous experience had included forming a 15-piece funk band called SuperBooty. According to the website, O’Hara launched Bootie Babes singlehandedly, designing the logo and website, applying for trademarks and patents, and overseeing product development. He clearly had fun with color names, which aim to appeal to tweens and teens. The purple on the left, above, is called Purp Slurp, and the blue is Hella Baloo. (Whether the overt sexuality is appropriate for this demographic is a subject I’ll leave to other critics.)

Unfortunately, O’Hara also seems to have taken the DIY approach to the rest of the brand language, which is an amateurish, trust-deflating mess. Here’s a line from the “Info” page:

SuperBooty President and CEO Mark O’Hara wanted to create a humorous, bold and truely [sic] unique beauty product that would literally “stand out” from the competition.

And the product name is misleading. This is a bootie—i.e., a short boot:

And this is a booty: 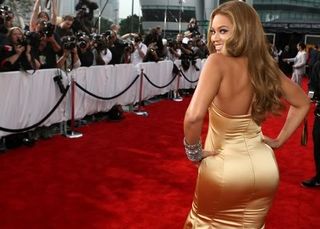 Beyoncé, via Viennie V. (The headline on the story is “Beyoncé’s Booty Is Inspiration for Rare House Fly’s Name.”)

Then again, maybe not.

Erin McKean tweeted me a photo of Sloshee margarita ice pops and wrote: “Saw this at the grocery store and thought you’d enjoy the name.”

Well. The name is an obvious pun on “slushy/slushee/slushie,” a generic term for a syrupy-sweet crushed-ice beverage. Unfortunately, Sloshee also evokes “sloshed,” a synonym for “intoxicated.” Alcoholic beverages can promise romance, adventure, and sex, but getting wasted? That’s a no-no.

But that may be the least of Sloshee’s troubles. For one thing, the company (based here in Oakland, I regret to say) can’t decide whether its name is “Sloshee” or “Sloshees.” (I couldn’t find a trademark application, so maybe the founders are still making up their minds. Or they may be lost in a product-testing haze.) The website admits to “a year of business and legal hurdles” before the 2009 launch. The copywriting hurdles still haven’t been surmounted. From the About page:

Sloshees started in July of 2004 after observing how fun and refreshing popsicles can be after a hot summer day. We thought to ourselves, wouldn't it be awesome if popsicles had alcohol in them? The idea was formed over a few beers but it took almost 5 years to solidify into a business.

And speaking of stumbling over hurdles, reader Stacey Kimmel-Smith, an equestrian who blogs at Behind the Bit, sent me an email about a clothing brand she’d seen at a tack shop in New Jersey.

“The company is European,” Stacey wrote, “and I wonder if maybe they selected the name without knowing that it sounds like a ‘bad word’ in English.”

When I finally stopped laughing, I checked out the Horze website. It’s replete with unintentional humor:

Who is Horze? Click here to see a movie. [Safe for work!]

Team Horze. [Cheaper by the dozen?]

This is the nature of Horze. [They’re born that way.]

Try it out yourself: Imagine strolling into a tack shop and saying, “Show me your Horze.”

There may be a cultural excuse here: Horze is a Finnish brand, launched in 2003 as an offshoot of Finn-Tack. Surely, though, there must have been at least one English-speaking person around to warn the founders that changing the S in “horse” to a Z results in “whores,” not Equine Zorro.

When I shared the Horze link on Twitter, Jonathon Owen (@ArrantPedantry) reminded me of this much-shared writing exercise posted on eBaum’s World: 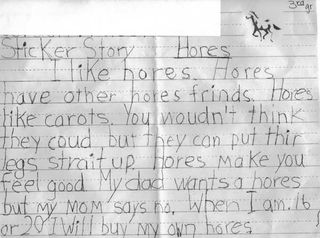 A different usage (which I think has been discussed at Language Log, though not in reference to this product):

Kingsley Amis once suggested an advertising slogan for a beer: "Makes You Drunk." Trouble is, it doesn't really distinguish the brand, does it? Bit while Pernod and Ricard and other brands of anisette are 45% alcohol, 51 proudly takes its name from its extra kick.