A couple of language notes from San Francisco Pride, the annual celebration that culminated yesterday with the Pride Parade from Market and Beale streets to Civic Center.

I spotted “Touch Our Junk!” on the marquee of the Nob Hill Theatre (not on the parade route). The façade was festooned with rainbow bunting. 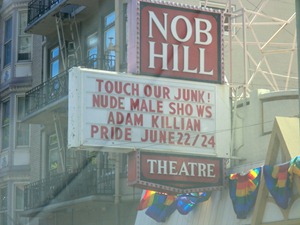 “Junk” as a slang synonym for “male genitals” became a “cri de crotch” (as the Washington Post’s Ruth Marcus put it) in late 2010, after a software engineer named John Tyner refused the full-body security scan at San Diego International Airport. “If you touch my junk, I’m gonna have you arrested,” Tyner told the screener. The trope quickly evolved into “Don’t touch my junk!” The Nob Hill Theatre marquee playfully inverted (ahem) the quote, turning a threat into an invitation.

As Ben Zimmer wrote in a December 2010 “On Language” column in theNew York Times, “junk” had been introduced into the lexicon of genital euphemisms in 1983, in a gay-themed short story by Ethan Mordden called “The Hustler”:

Since it’s doubtful that the young popularizers of junk were familiar with Mordden’s fictional forerunners, something about the sound and sense of the word must have made it ripe for reinvention. Tom Dalzell, whose latest book is “Damn the Man!: Slang of the Oppressed in America,” sees junk catching on euphemistically: “To diminish the shock, we call the genitals childish names or use vague and sometimes coy euphemisms —down there, unit or thing.” The Stanford linguist Arnold Zwicky concurs, adding stuff as another euphemistic model forjunk. Unlike these other terms, however, junk is a harsh monosyllable evocative of four-letter taboos.

The other language innovation I observed was Bay Area OccuPride, whose name is a nifty blend of occupy (the American Dialect Society’s 2011 Word of the Year) and pride, the one-word tag for “celebration of gay/lesbian/bisexual/transgender identity and achievements.”

OccuPride was formed to protest the commercialization and corporatization of the Pride observances.

As for “gay pride,” the phrase first appeared in print in the Washington Post’s June 29, 1970, coverage of a march that “was the climax of what its organizers called ‘Gay Pride Week’.” (Note the use of quotation marks around Gay Pride Week.) “Pride” was chosen because it’s the antithesis of “shame”; earlier slogans had included “gay is good” and “gay liberation.” The success of “pride” is often credited to Brenda Howard, an activist in New York City who helped organize the first-anniversary commemoration, in 1970, of the Stonewall riots.

“Pride” is also, of course, the collective noun for a group of lions. This association has been made explicit in some usages of “gay pride.” 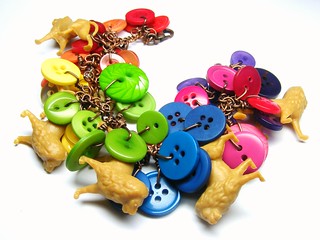 According to the OED, “pride” is also an obsolete term for sexual desire (“esp. in a female animal; heat”). It’s also one of the seven deadly sins. Columnist and author Dan Savage wrote in a June 1999 issue of The Stranger:

Webster’s defines pride as “inordinate self-esteem,” or “a reasonable and justifiable self-respect." Whether inordinate or justifiable, pride was an effective antidote: as more gays and lesbians committed the sin of pride, fewer were victimized by shame.

Posted at 07:19 AM in Advertising, Culture, Euphemisms, Slang, Slogans and Taglines, Word of the Year, Words | Permalink