« Names in the News: Georgi Willow | Main | Word of the Week: Dark Money »

Each week, the New Yorker’s Culture Desk blog posts a Twitter contest with the hashtag #tnyquestion. The June 1 contest asked readers to contribute a new word to the English language; the results have been compiled in a handsome PDF dictionary. The June 8 contest—invent a corporate-literary mashup—resulted in more than a thousand responses, including “Of Mice and Mennen,” “A Tale of Two Citis,” and (from yours truly) “50 Shades of Grey Poupon.” Winners revealed here. (Note: I cannot claim credit for “Pninterest”; I only retweeted it.)

The ass-fication of American branding continues apace: “Six print ads that use ass imagery (not actual asses, sorry) to sell stuff.” Safe for work, but may provoke loud groans.

Go ahead and say “the Internets,” you irony-overloaded hipster, but never, ever say “vinyls.”

You don’t need a designer when the copy’s this good: a Flickr set of copywriter Joe D’Allegro’s signs for Synergy Fitness in Jersey City. (Via AdFreak.) 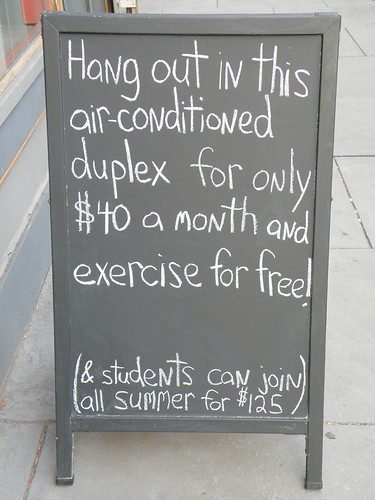 Glossed Over saves you the annoyance of reading the July issue of Glamour. “Less than zero: Likelihood that I will ever use Glamour’s Word of the Month, ‘frizzle’.”

What not to name your spaceship. (By the way, did you know that Greece’s Olympic Airlines was originally called Icarus? What were they thinking?)

Derek Lowe, who blogs about science and the pharmaceutical industry for In the Pipeline, asks: “What’s the biotech/pharma company out there with the worst name” (other than Abbott Labs’ new AbbVie)? His commenters gleefully ante up.

The Obama 2012 campaign slogan is “Forward,” but Americans would rather go in the opposite direction, argues advertising creative director Judith Grey.

“My great-grandfather started this business with one simple mission that we abandoned decades ago.”

A defense of undictionaried (aka madeupical) words by lexicographer and Wordnik founder Erin McKean.

Why is it the United States and the Netherlands … but just plain Ukraine? Etymologist Anatoly Liberman explains to the BBC.

“Logic is the enemy of a successful brand name,” writes veteran marketing strategist Al Ries. Example: “Search.com is shorter (one syllable instead of two), more memorable and a lot more credible than Google.com. Should Google.com change its name to Search.com?” (Hat tip: @IgorNaming.)

Naming your company is just the first step. Catchword Branding lists five factors to consider when launching a company name.

Prosign, rag-chewing, umpty, and other telegraph lingo. (And check out the link to more telegraph and radio slang.)

And as long as we’re on the subject, I’m loving these social media propaganda posters by Etsy vendor Aaron Wood. Available individually or as a compilation. Via @mightyredpen.

Glad you like my social media propaganda posters! :D