If You Give a Dog an Umlaut

I spotted this Yöghund display in the window of Holistic Veterinary Care here in Oakland. 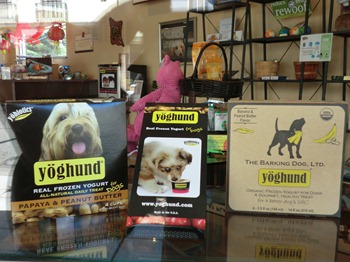 Let’s zoom in on the logo:

The Yöghund website puts it slightly differently: “Yöghund is the first frozen yoghurt treat made for dogs.” A long-overdue breakthrough in gelato-lacto-canine nutrition, I’m sure you’ll agree.

But wait—is it yogurt or yoghurt? And what’s up with the dotted O—the Spot spots, you might call them?

As it happens, I’d just read Lynne Murphy’s recent post at Separated by a Common Language about “yog(h)urt,” so I was already pondering why Americans usually spell it yogurt and Brits spell it yoghurt. Here’s some background from Lynne:

This word comes to English from Turkish yoğurt, but English doesn’t have the letter ğ or the sound that goes with it, so we had to figure out what to do with it. I’m relying on Wikipedia here, but it says that in some dialect(s) ğ is not pronounced as its own sound, but instead lengthens the preceding vowel. That would explain why it turns up as yaourt in French (and has also made appearances with that spelling in English). In another dialect(s?), ğ is pronounced as [ɰ], which is a velar approximant. So, it’s like a [w], but without the lip-rounding. This is all to say that it's not a hard-g sound at all.

Hmm, no umlauts in evidence—just the little Turkish flourish over the G. As for the UK/US spelling distinction, Lynne writes:

I can't help but think that the relative popularity of the yoghurtspelling in the UK has something to do with how its pronunciation is evolving. … This is to say: a frequent, modern British pronunciation of the word has a first syllable that rhymes with dog (in the same dialect, at least. The [ɒ] vowel ofBritish Received Pronunciation (RP) does not really exist in American English.) …

Americans pronounce it more like the older pronunciation--except without that cent(e)ring of the vowel that RP does. And if you're still having a hard time imagining any of these sounds, listen to the first two pronunciations of yogurt at Forvo. The first is the modern British, the second American.  Actually, Forvo also has a Turkish pronunciation, the vowel of which doesn't directly correspond to any of the English ones (it's this one).

Still no umlauts! I think we may safely conclude that what we have with Yöghund is yet another case of gratuitous decorative dotting. The company that makes Yöghund isn’t in an umlaut-using country like Finland or Germany. And it isn’t in a “yoghurt” environment, either: it’s based in Exeter, New Hampshire.

Even without the dot-confusion, Yöghund poses a pronunciation challenge. The -hund suffix obviously signifies “dog,” but to aspirate the H you need something like a glottal stop after the Yög-, and that’s awkward for English speakers. (It starts to sound like “yoga-hund.”) Of course, if you take the umlaut literally you also have to pronounce the O through semi-pursed lips. And that’s a lot of work for lazy American mouths.

I don’t have a dog, so I can’t give you a report about the product itself. But in case you were wondering, here’s good news from the FAQ:

Dogs are lactose intolerant, but rather than upset a dog’s stomach, Yöghund may actually settle it!

Posted at 07:13 AM in Animals, Naming, Retail, Spelling, Umlaut | Permalink

Along the Black Sea, anyway, "değil" (which means "not," somewhat in the "Wayne's World" sense) is pronounced like a slightly-drawled "dale".

I had less trouble with ğ than I did with the dotted vs. undotted i.

I don't see a difficulty in pronunciation, any more than there's a difficulty pronouncing the phrase "my leg hurts". No glottal stop there. You might get the /h/ realised as [χʷ] sometimes, but that is not a problem.

(Incidentally, I disagree with Lynne about the hypothesised spelling/pronunciation link, but that was covered adequetly in the comments there.)

It's "yewg" to me. See an umlaut, pronounce it, I always say.

>I don’t have a dog, so I can’t give you a report about the product itself

When contemplating the likely response of a dog to this product, it might be helpful to remember that dogs are, at heart, scavengers. We have a running inventory of Things Our Dogs Won't Eat, and it runs to approximately 3 items: lettuce; raw onions (said to be bad for them anyway); sour cherries. They'll give anything else a go.

As for "lactose intolerance," Harold McGee (of cooking and kitchen fame) notes that the ability to digest milk as adults is actually limited, certainly among humans, to a relatively small percentage of people who are of Northern European extraction. "Lactose intolerance" is in fact the norm among adult humans, and probably works in a similar way among many other adult mammals after weaning. He notes also that people can tolerate larger quantities of milk-based products if those products are, in effect, pre-digested, i.e., the lactase has been broken down by bacteria. Indeed, that's what happens in cheese and, yes, yog(h)urt.

Ok! Probably more than you really wanted to hear. :-)