Seen around the Internet recently:

The POREfessional is “a PRO balm that minimizes the appearance of pores.” A blend of “pore” and “professional”; from Benefit. I can’t explain why PRO is in all caps. 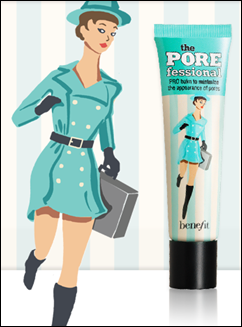 On April 24, Kraft Macaroni & Cheese asked Facebook fans to “like” a post. (“You never know what may happen,” was the teaser.) More than 4,600 people followed orders, and in return Kraft “liked” them back by mentioning each and every one of them in a six-minute “Likeapella” music video. A blend of “like” and “a capella.” A slogan from SEAT, the Spanish car company that’s owned by Volkswagen: Enjoyneering. A blend of “enjoy” and “engineering.”

When you get behind the wheel of a SEAT car, you don’t just go for a drive, you go for an experience. One that will capture your imagination and touch your emotions.

That’s the essence of ENJOYNEERING. … You see, ENJOYNEERING isn’t just about engineering quality cars today. It’s about bringing more enjoyment to the roads of tomorrow.

(Thanks to reader Louis De La Foret for the tip.)

Honda, on the other hand, wants you to stop using all that social media. Specifically, the auto company last month offered a $500 reward to the people most active on Pinterest if they’d take a 24-hour intermission—a Pintermission—to go out and, you know, do stuff. The ads (by agency RPA) are medium-clever, but “Pintermission” suggests 20 minutes in the lobby after the first act of The Caretaker.

Posted at 06:57 AM in Beauty, Cars and Motorcycles, Facebook, Naming, Portmanteaus | Permalink

"Porefessional" sounds like a mispronunciation (the kind that gives rise to "perspective" for "prospective"), while "enjoyneering" is just awful, with that awkward stress clash in the middle.

I drove passed a store today in Providence, RI, and winced at the name: CreatOyvity. The big O in the middle was a smiley face.