« Word of the Week: Grasstops | Main | On the Visual Thesaurus: Presidential Campaign Lingo » 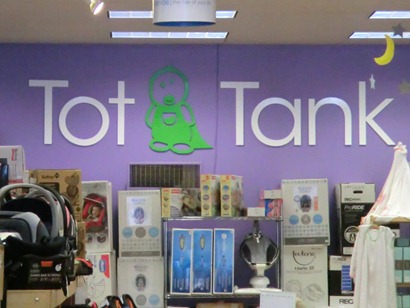 I can’t tell you what the owners of Tot Tank, a children’s store on Alameda’s Park Street, were thinking when they named their business. But I can share my own negative associations:

Tank (noun): A large container for liquid or gas.

Tank (verb): To plummet; to suffer a sudden decline or failure.

Tank up (verb): To drink to the point of intoxication.

I had one additional association: “Shark Tank,” the ABC reality show in which entrepreneurs ask a panel of investors (“sharks”) for funding. I am a huge fan of this show and strongly recommend it to anyone starting a business or simply interested in how smart businesspeople think. But I wouldn’t want to think about hungry hammerheads when I’m shopping for onesies and bibs.

On the other hand, there’s that guppy-like Tot Tank logo. Maybe—maybe—we’re supposed to imagine the merchandise as colorful bait for babies.

Sorry. That’s not working for me either.

Bonus link: Read my post about the political use of “in the tank.”

And then there's the toilet tank ...

... or the fish tank, which also doesn't work too happily vis-a-vis infants.

"Tot tank" makes me think of the cover of Nirvana's "Nevermind" album: http://en.wikipedia.org/wiki/Nevermind