« Word of the Week: Rampture | Main | Speaking Truth About Power »

Here’s a studious-looking specimen in front of International House of Wine (no website), in the theater district at 395 Geary Street: 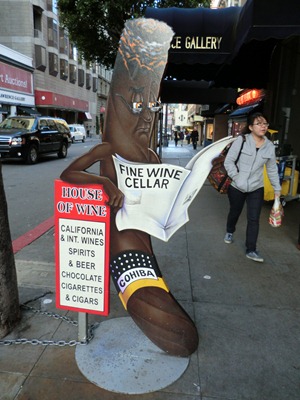 There’s a Turkish-stereotype (or Shriner-stereotype) cigar man in front of Dean’s Fine Cigars at 715 Market Street. 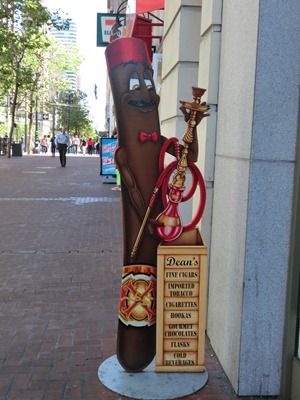 And on the other side of the door there’s an endangered cigar-store Indian gazing skyward. 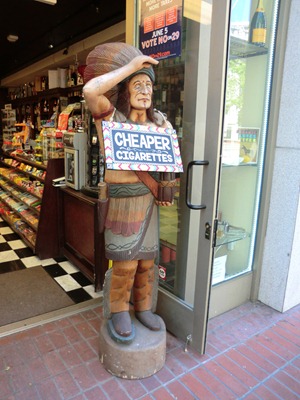 I think he’s saying, “Oy vey—it’s come to this?” On behalf of all European-American usurpers, I apologize.

I couldn’t help noticing that the skinny yet muscular arms of the fez-wearing cigar bear a strong resemblance to those of International House of Wine’s cigar man. The same artist, perhaps?

There’s a clue on the base of the Dean’s sign: 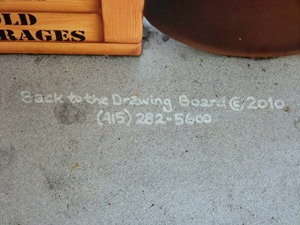 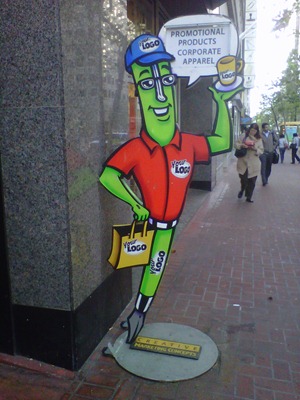 Sometimes a cigar is not just a cigar. It’s a fountain pen!

The cigar men seem to have replaced a more realistic genre of street advertising, as seen in this photo I took in 2009 on Third Street near SFMOMA. 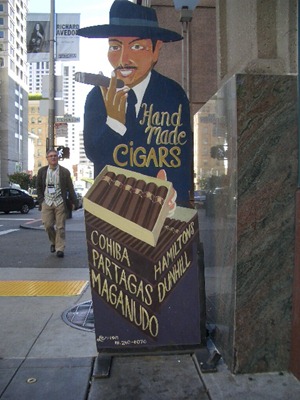 Here’s his weird yet worthy replacement, in front of Zain’s Liquor: 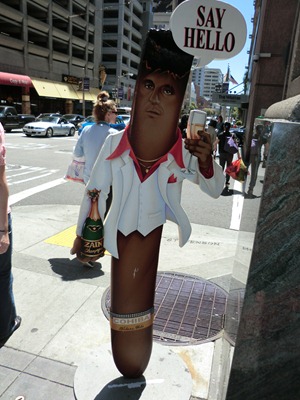 Are these artifacts unique to San Francisco, or do other cities have them, too?

For other examples of folk-art advertising signs, see my post about muffler men.

Posted at 08:27 AM in Advertising, Art, In the Wild, San Francisco, Tobacco | Permalink

I think I have figured out how to decorate that big, underused room in my house!

I also suspect that this would only last thru my current bachelorhood, although given my ongoing track record, that may prove long.

"Mr. Disco Collar" with the soulful eyes is actually an Al Pacino/Scarface knock off. In the film, one of Pacino's many quotables is "say hello... to my little friend!"

In the film, Scarface's "little friend" is an M16 with grenade launcher attached.

Thanks, Jonathan! I'm embarrassed to admit I've never seen the Pacino "Scarface," only the 1932 version with Paul Muni. Must correct that oversight.