Are We Having Funner-er Yet?

Something about this Hipmunk ad seemed familiar to me. 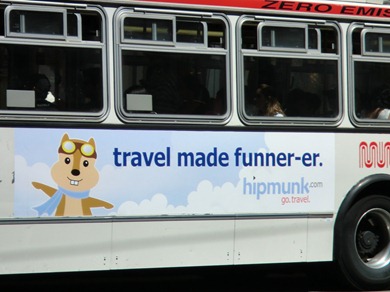 Then I remembered: Back in 2008 Google introduced its first Android phone, the T-Mobile G1. The ad for the phone was, as Ben Zimmer wrote for Language Log, “packed with jocular comparative adjectives: smarterer, connecteder, funnerer.” Ben went on:

This isn’t just an homage to Dumb and Dumberer, the even more dim-witted sequel to Dumb and Dumber. Rather, it’s being recognized by many in the techie community as a pointed jab at Apple honcho Steve Jobs, who recently enthused about “the funnest iPod ever.”

Jobs died last year, the iPod Touch website no longer includes a reference to “funnest” (it now says “It has fun written all over it”), and the G1 has evolved into the G2X. But “funner-er” lives on at Hipmunk, the San Francisco startup founded in 2010—a generation removed, in tech years, from that 2008 Android campaign.

You may be wondering about the Hipmunk name. Here’s a story about it from TechCrunch, reproduced verbatim with the usual caveat about TechCrunch’s slack writing and editing:

Like many startups in today’s Silicon Valley*, [co-founder Adam] Goldstein was struggling to find an apropo domain that was topical and more importantly, available. After dangerously flirting with (and even purchasing) domains like BouncePounce.com and Trot.me, Goldstein’s girlfriend** told him to identify a cute mammal that he could build a brand around. Hipmunk fit the bill.

You’ll notice something missing from this origin story: an explanation of how Chipmunk (I presume) became Hipmunk. I gather that Chipmunk.com wasn’t available and (“more importantly”) no one was willing to part with cash for (a) domain negotiations or (b) professional naming services. Or maybe the founders just wanted to emphasize their hipness. A follow-up question from the reporter would have been helpful.

** I’m sorry to keep sticking it to TechCrunch, but who was doing the dangerous flirting and purchasing—Goldstein or his girlfriend? Dangling modifiers: use at your own (and your readers’) peril.

Posted at 06:58 AM in Advertising, Comparatives, Grammar, How They Got That Name, Redundancy, San Francisco, Superlatives, Travel | Permalink

I was at the grocery store yesterday and saw something with the slogan "Make it creamier-er-er". Yes, with three "er"s.

Sadly, this explosion of "er" did not make me remember what the product was.