I’m no Three Stooges expert, but I’m familiar enough with the canon to know there’s something funny about this New York Times headline: 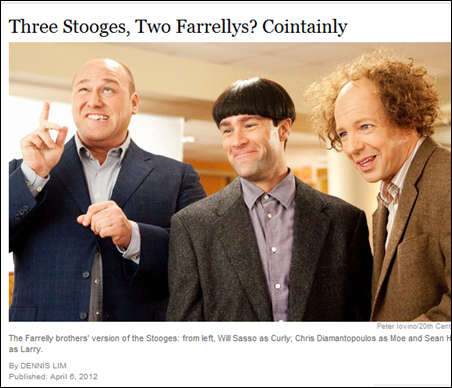 Not funny ha-ha; funny peculiar. Even if you could somehow give “cointainly” a soft-C sound—violating the general rule of hard C before A, O, and U—what’s that first N doing there? What the heck does “coin-tainly” mean?

If I had written the headline, I’d have rendered that cherished Stoogeism as soitenly. That is in fact how it’s spelled on a six-DVD collection, Soitenly Stooges, and in headlines in the San Francisco Chronicle and on the CBS News website. Heck, you can even buy a “Soitenly” license plate.

I wasn’t the only one to raise an eyebrow over the Times headline. Diego Sorbara works on that paper’s national/foreign copy desk, whose long arm evidently does not stretch all the way to Arts & Leisure.

When I retweeted Diego, the response was prompt and, under the circumstances, predictable.

Read the Stooges story here. In the print edition “cointainly” appears a second time, in the headline on the jump page.

UPDATE, April 10: The headline has been changed to read “Three Stooges, Two Farrellys? Soitainly.” But there’s no mention of it in the online corrections column.

This travesty... will not stand!

At the risk of stating the obvious, I don't think it's hard to see where this came from -- the writer was thinking about syllables instead of the whole word. The word being replaced is "certainly." The writer kept "c---tainly" and rewrote only the "ert" sound. By that reasoning, it should be "coitainly." I can only guess that the writer thought having a word reminiscent of "coin container" was better than having a word that mixed "coitus" and "taint."

But I'm only guessing.

The writer's mistake, though, was in thinking that the Stoogefied spelling of "certainly" had not yet been tried and, to a certain extent, agreed upon.