Signs of the (past) times: 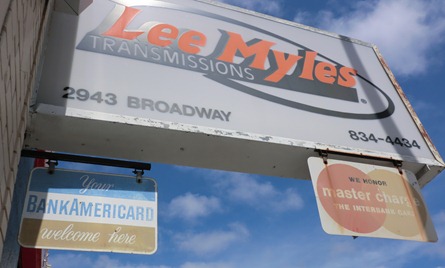 That’s an original BankAmericard sign, probably about 40 years old. And that’s Master Charge, the predecessor of MasterCard. According to a nice fellow named Paul, who answered the phone at Lee Myles when I called, the signs have been hanging there since they were new. (Lee Myles Transmissions opened in Oakland in 1957.) 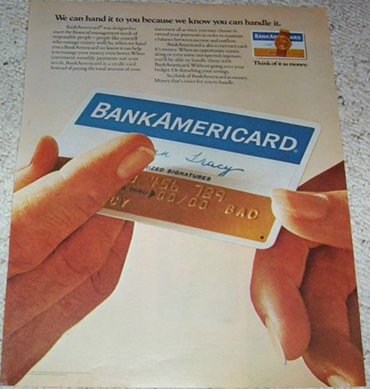 “Think of it as money”: 1972 BankAmericard ad from eBay. Would a copywriter today use “like” instead of “as”?

Bank of America—which had been founded in San Francisco in 1904 as the Bank of Italy—introduced BankAmericard in 1958, mailing it to 60,000 households in Fresno, California. It was the world’s first all-purpose credit card and the first successful credit-card “drop” (unsolicited mailing). Until 1965, the card was offered only in California. 1972 metal BankAmericard sign similar to the one I photographed. This one’s for sale on eBay.

An early BankAmericard TV commercial, which I tried unsuccessfully to locate online, featured a cartoon orchestra conductor and a catchy symphonic jingle. According to Lawrence R. Samuel, author of Brought to You By, it was one of the first uses of animation to promote a “serious” product such as a credit card.

Bank of America gave up the BankAmericard program in 1970, when issuer banks took control. In 1975 BankAmericard united with three other credit cards to become Visa, a name conceived by Visa International founder Dee Hock.  (This is an abbreviated version of the Wikipedia history, much of which is based on Joseph Nocera’s 1995 book A Piece of the Action: How the Middle Class Joined the Money Class.) Hock said the name was “instantly recognizable in many languages in many countries, and that it also denoted universal acceptance.” (Wikipedia)

Master Charge, born in 1969, was the successor to the Interbank Card Association, which had been formed in 1965 by several California banks to compete with BankAmericard. The name was changed to MasterCard in 1979. (Source: Credit Card Forum.) Before there was Klout, there was clout. 1977 Master Charge ad from eBay.

In 2007 Bank of America—now headquartered in North Carolina, alas—brought back the BankAmericard name as “BankAmericard Rewards Visa.”

Posted at 08:06 AM in Advertising, Banking, History, In the Wild, Oakland, Signs | Permalink

I have a hunch (Mark Liberman would know how to test it, but I don't) that "think of A as [rather than "like"] B" survives in everyday US English: "I think of her as a friend," "I think of it as a vacation," etc.

"We can hand it to you because we know you can handle it"! That's so much more civilized and grown-up-sounding than the way credit seems to work nowadays....