Yet another happy-umlaut-embellished brand name to add to the list: BüK (“pronunciation: boook”). 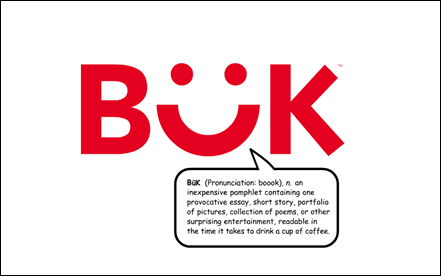 A BüK is an actual paper product that costs $1.49 and is 16 to 32 pages long. Choose from a variety of themes, including CookBüK, WordBüK, and SpookBüK (horror stories). If you’re in the hospitality business, you can order some PillowBüKs (love that name and all it implies) to leave in guest rooms.

BüK joins Füd, güd, Häagen-Dazs, and other brand names in which the umlaut serves no purpose other than decoration.

By now, Dunkin’ Donuts should really be called Dunkin’ Toroids: the chain is, believe it or not, the number-one retailer of bagels in the United States. Last week the company jumped on the “artisan” bandwagon and introduced Artisan Bagels, which feature “a soft and chewy texture with bolder flavors.” Dunkin’ Donuts is now positioned to compete with Domino’s Artisan Pizzas, Starbucks Artisan Style sandwiches, Tostitos Artisan Recipe chips, and Panera Bread’s “artisan fast food” for top honors in the Culinary Buzzword Olympics. More about the artisaning of American brands here and here. (Via The Impulsive Buy.)

In a January post about “slut” in brand names, I mentioned Eggslut and Bookslut but neglected to include the most venerable slut of all, Los Angeles’s Retail Slut (“Rude and Nasty Clothes for Chicks and Dicks”). The original store opened in 1983 “as one of the first shops to bring punk and gothic style to Melrose [Avenue].” Over the years it changed locations four times; the Wikipedia entry says it finally closed in 2005. There’s no merchandise available on the website, which appears not to have been updated in a while but which does include a long list of celebrity shoppers, among them Andy Warhol, Madonna, Pat Benatar, Iggy Pop, Ice-T, and one Buster Bloodvessel.

Posted at 07:50 AM in Books, Buzzwords, Food and Drink, Naming, Retail, Trends, Umlaut, What Does It Mean?, Words | Permalink

They may think they're clever with BüK, but it's still "book" by any other name - why, just look at the text inside the balloon: "Pronunciation: boook [sic]." That's what we call an admission against interest. I don't know what this trademark registration they received gives them - http://tarr.uspto.gov/servlet/tarr?regser=serial&entry=76597748 - the right to spell it that way? Apparently not even that, as the PTO has permitted others to register the same cutesy-poo spelling.