In the beginning there was the bikini, which begat the monokini, the tankini, the burqini, the pubikini, and the mankini. Now meet their sister in swimwear, the nun-kini. 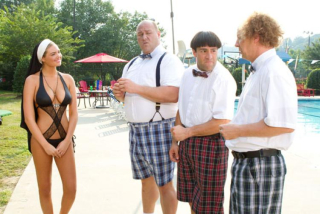 Kate Upton with Sean Hayes, Chris Diamontopoulis, and Will Sasso. Photo via The Hollywood Reporter.

The skimpy swim habit worn by Kate Upton in the recent Three Stooges film drew the ire of Catholic League president Bill Donohue, “who makes his living fecklessly complaining about cultural products we unreservedly enjoy,” according to the online publication Nerve. “The TV show never mocked nuns or showed infants urinating in the face of the Stooges,” Donohue lamented. (Note: There never was a Stooges TV show. Perhaps Donohue was thinking of Abbott and Costello.) Ms. Upton portrays one of several nuns in the film; another is played by Larry (“Curb Your Enthusiasm”) David. His character is named Sister Mary-Mengele.

Donohue referred to Upton’s “nun-bikini,” but in a response to Donohue a spokesperson for 20th Century Fox, the film’s distributor, called it a “nun-kini,” using the universal suffix for any novel swim garb. “I think we did the audience a favor by letting Kate Upton wear the nun-kini rather than Larry David—it could have gone either way,” the unnamed spokesperson told the Hollywood Reporter.

Speaking of babes, take a look at Babi-kini, whose tagline is “My First Bikini” and which sells teeny swimsuits for tiny tots. This one retails for $30: 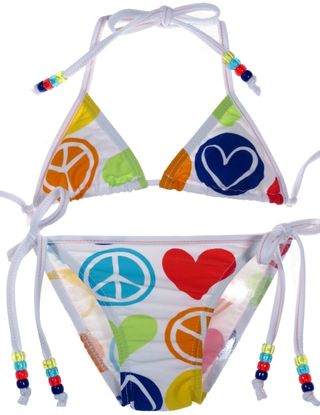 And over at TMZ, they’re celebrating “Spring-kini Season.”

For an impressively large collection of women’s-swimwear lore, see Bikini Science, whose sections include “Unitards and the -Tard Genius,” “Soutien-Gorge (the Bikini Top),” and “Bikiniology.”

You may also be interested in my original post about the -ini/-kini affix. Follow-ups here and here.

In the mid-60s there was, in effect, a 3 Stooges TV show. Maybe those short films were not made for TV, but they were shown at regular times on TV, at least on some stations, at least on one station in the NYC area.

Tom: True, the old Stooges films were in heavy rotation on TV, but an attempt to create a TV series was unsuccessful. There was a very short-lived animated series in 1965-1966: http://en.wikipedia.org/wiki/The_Three_Stooges#Television

There WAS a Three Stooges television show - we (Malta Europe) had it on local television, in English, and it was also show on Italian television, dubbed into Italian.
http://www.tv.com/shows/the-three-stooges/

Tania: Those shows were movies repackaged for TV. The only made-for-TV Three Stooges series was an animated show.