Word of the Week: Minaudière

Minaudière: A small, hard-sided, often bejeweled evening bag meant to be carried in the hand. Pronounced min-oh-dee-AIR. From the French adjective meaning “affected” or “coquettish”; from the verb minauder, “to simper.”* 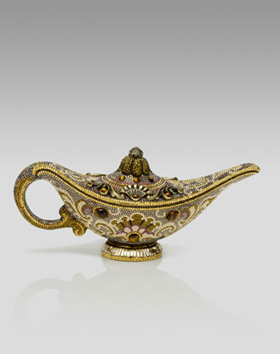 The minaudière was invented and named around 1930 by the jewelers Van Cleef & Arpels. Here’s how Antique Jewelry University tells the story:

The minaudière is a type of vanity case. Constructed from gold or silver, it takes the form of a box. When opened, it reveals various lady-like essentials: a comb, a case for lipstick, a lighter, small compartments for cigarettes, change, and powder. The inspiration for the design came from a friend and client: Frances Gould, wife of American railroader Jay Gould. Gould apparently rushed to a meeting with Charles Arpels, throwing her necessities into a tin Lucky Strike cigarette case. Arpels took the idea and made it his own. He named it for his wife. The French verb minauder means, roughly, to simper or smile coyly. Madame Van Cleef’s simpering, especially at parties, was famous.

If the story’s true, it would be a rather backhanded tribute. (And there’s something wrong with the names. Charles Arpels was a founder, in 1896, of Van Cleef & Arpels with his brother-in-law Alfred Van Cleef; his wife would have been Mlle. Van Cleef but Mme. Arpels.)

The contemporary queen of minaudières is Judith Leiber (pronounced “Leeber”), who was born in 1921 and trained as a handbag maker in her native Budapest. She moved to New York after World War II. She made her first minaudière in 1967, when a different handbag design turned out to be poorly gold-plated; after Leiber covered it with rhinestones it became a hit with customers. Her designs are often elaborate and whimsical: dogs, birds, fish, a slice of cake. Leiber’s minaudières have been collected by museums around the world, including the Smithsonian and the Metropolitan Museum of Art.

Side view of stacked-books minaudière by Judith Leiber, about 3" x 5". Collection of FIDM (Fashion Institute of Design & Merchandising), New York.

“In Leiber’s world, the essentials are a handkerchief, a lipstick, and a one hundred dollar bill.” – FIDM.

Watch a short, wordless film about a minaudière with multiple marvelous compartments.

* Totally off topic, but “simper” reminds me of “a simpering, whimpering child again” in “Bewitched, Bothered, and Bewildered” from Pal Joey. Here’s Patti LuPone singing the naughty original lyrics by Rodgers and Hart: “Horizontally speaking/He’s at his very best.”

Posted at 08:23 AM in Fashion, French, Word of the Week | Permalink

There seem to be a lot of alternative stanzas that performers can pick and choose. I was waiting for "Romance, fini; your chance, fini; those ants that invaded my pants, fini," which Ella Fitzgerald included but LuPone omits.

And you do remember the trio of bats in "Pogo" named Bewitched, Bothered, and Bemildred?