« Word of the Week: Cicerone | Main | BelVita vs. Velveeta »

The Persistence of Susie

During a recent evening of TV viewing I saw repeated airings of “Going Pink,” the latest installment in Verizon Wireless’s long-running “Susie’s Lemonade” ad campaign. The ads, created by McCann Erickson, feature a plucky, adorable girl, age 8 or 9, who over the course of the campaign turns a conventional idea—a neighborhood lemonade stand—into a mini-empire. The ads have been praised for “depicting a positive female role model” (AdWeek) and for being “memorable,” “engaging,” and “heartwarming.”

The spots are indeed charming and expertly produced. But something bothers me about them: Susie. Not the character—her name.

Think about it: how many 8-, 9-, or 10-year-old American girls do you know named Susie? If you have a young daughter, was Susan or Susie on your short list of names for her? I’m guessing the answers to those questions are “none” and “no,” because Susan/Susie is very far out of the 21st-century baby-naming mainstream (yet not far enough out to be cycling back into popularity, like some early-20th-century names). The last time Susan was in the top 100 baby names was in the 1980s, according to the Baby Name Wizard’s Name Voyager tool. (It ranked #4 in the 1950s and #3 in the 1960s.) In 2010, the last year for which statistics are available, Susan barely appears on the graph: its rank was #792.

So why would Verizon and its ad agency give their protagonist such an unpopular, anachronistic name—a name that now suggests not a fourth-grader but her grandmother? Laura Wattenberg of Baby Name Wizard looked at this question in a different context in a November 2010 blog post, “The Mysterious Persistence of Little Johnny,” whose title I’ve cribbed. Wattenberg was inspired by this New Yorker cover: 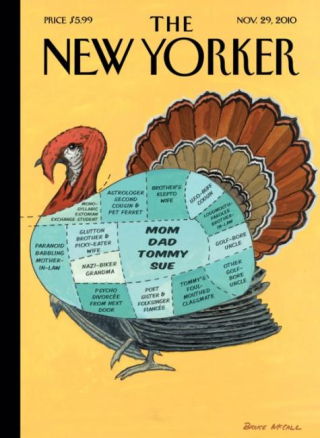 In her post, Wattenberg observes that we still turn to names like “Tommy,” “Johnny,” and “Sue” whenever we need “generic symbols of American childhood.” They’re examples, she says, “of a distinctive faux-name species: the Mid-Century Normative Child (MCNC).” She continues:

I remember the generic use of “Little Johnny” sounding old-fashioned back in my 1970s childhood. All these years later, Johnny still rules the roost alongside the New Yorker’s Tommy and Sue, as well as Jimmy (a generic child I spotted in a recent Dear Abby column). All of those names had their heydays in the mid 1940s. The most up-to-date name on the standard MCNC list is Timmy, which peaked in the late ’50s.

It’s as if we locate the essence of childhood itself in that narrow historical period. There’s some logic to that. The early bound is set by the end of WWII, and the first generation of American kids fully protected by child labor laws. The end is the last cohort to experience childhood before the creeping cynicism of the Vietnam era. We signal “little kids” with names historically pinned to innocence and carefree prosperity.

And if Verizon had wanted to be trendy and realistic and alliterative, it could have used the actual first name of its young star: Lennon. (Her last name is Wynn.) You just can’t ask for a more perfect example of the early-21st-century girl’s name style than Lennon: androgynous, celebrity-influenced, and historically rare. (Lennon has never been ranked among the top 1,000 baby names for either sex.)

But contemporary realism and fashion were clearly beside the point in the Verizon ads, despite their emphasis on GPS, 4G LTE, and other whiz-bang technology. “Susie” seems to have been chosen because it’s quaint and anachronistic. The name belongs to a dimly remembered past, a golden age in which kids didn’t need adult supervision or city permits to operate lemonade stands, and parents didn’t care if their kids’ names weren’t cool and unique. Normative was the way to go. By choosing “Susie” over the more-likely candidates, Verizon may be signaling that it’s counting on consumers to accept its brand as normative, too.

Posted at 07:10 AM in Advertising, Anachronism, Baby Names, Telecom | Permalink

@rootlesscosmo: You're absolutely right, of course. I've fixed it. Thanks!

It's interesting: I recently saw one of the latest VZW spots featuring Susie, and while I thought the commercial was well done (although to be honest, had you asked me at the top of your article what company sponsored it, I'd have been flummoxed), something didn't feel quite right to me. I am pretty sure you nailed my discomfiture.

I'm of an age to remember when Susie (and Suzy and Susan and Sue) were popular names. I now have two granddaughters, whose names are Alison and Virginia (named for her paternal great-grandmother). I visit them often enough to be familiar with the elder's friends' names—and I've never heard of a Susan.

Another interesting phenomenon is that most kids these days use their full names -- I can count on one hand the number of kids I know (particularly boys) who use a shortened form. Kids are now Thomas, William, James, Matthew, and Stephen (never Tommy, Billy [although we do know quite a few Wills], Jimmy, Matt, or Steve). On the flip side, there are loads of kids whose given names are in fact shortened forms, like Jack, Max, and Jake.

I won't defend the name choice strongly, but I think it does have some characteristics that I bet/I am guessing they were looking for:

Unambiguously female. I'd be willing to bet that they were actually looking for a name that _wasn't_ androgynous and that clearly said "girl" (not just female, see also next point).

Diminuitive. Many contemporary names don't lend themselves to the dimuitive of either size or affection. (How do you do that to the name "Lennon"?) One of the themes of the ad is that the cute little girl is creating an empire. (PS Ask me how many times I've heard someone say "Mikey likes it!!")

_Not_ rare. I think they wanted a name that said "girl" not just for the demographic of the girl in the ad, but of everyone who sees the ad, from teenage entrepreneur to, dunno, CEO. Whatever its drawbacks, "Susie" is a name that everyone, but everyone, recognizes and that's, if nothing else, an inoffensive choice.

I agree that it's a name from a previous generation (we had many Susans in my primary-school cohort in the 60s, along with Debbies). Maybe they could have worked harder to find a name that's more contemporary -- I like "Emma," having one of those in the house. But if they were indeed factoring in the criteria above (and what do I know? I'm in software, for heaven's sake), I can see where they came up with "Susie."

@Mike: Your well-articulated points are what I was getting at when I said the name is "normative."

Interesting thing about diminutives: they are very much out of fashion with higher-income American families. Hang out at a (hyper-safe, amply cushioned) playground in an affluent neighborhood and you'll encounter many Williams, Nicholases, Charlottes, and Elizabeths, but few Billys, Nicks, Lotties, and Lizzies. (See http://www.babynamewizard.com/archives/2004/11/the-new-formality -- and there are other articles about how this phenomenon is class-related).

So the deliberate choice of an unambiguously female diminutive is not only nostalgic but also class-conscious.

But it's worth noting, as @babynamewizard pointed out in a tweet, that more girls are now named Sawyer than Susan.

No playgrounds for me, except virtual. I just now looked at the Facebook Friends list for our 13-year-old. Here's a sampling:

Good call by Ms Wattenberg, I think. To this day, I generally refer to that other anachronism, the Nuclear Family, as "Joe and Susan Sixpack and their 2.3 kids."

I'm reminded of this xkcd cartoon from last year:
http://xkcd.com/988/

Punchline: Every year, American culture embarks on a massive project to carefully recreate the christmases of baby boomers' childhoods.

Since you're interested in "name anachronisms", I created a scale that can be used to rate how "out of place" a name is in a given setting:
http://millennialkelly.blogspot.com/2012/04/name-anachronism-scale-nas.html