It’s been a good month for numbered lists about names and naming. Starting with the longest list: Paola Norambuena, senior director of verbal identity at the global branding agency Interbrand, identifies 10 of the most common naming mistakes, including one that tops my own list: “Forgetting that naming is as strategic as it is creative.”

In a guest column for Fast Company, Matt Gordon and Nick Foley of Landor’s Chicago office enumerate eight principles of product naming, from “Make it memorable” to “Expect its story to involve.” The title’s a bit misleading, because they cover corporate names, too—including one of Landor’s own, Accenture. Sneaky devils. (Via @operativewords.)

Catchword’s Beth Gerber, a brand strategist and creative director, points out five ways in which product naming differs from company naming. “A company name is an umbrella,” Beth writes. “A product name, a hat.”

Trademark lawyer Jessica Stone Levy just received her first Birchbox delivery of cosmetic samples. Gather ’round as she opens the lid and reveals the branding hits and misses within. Like Jessica, I snickered over “For hair on days of unwash,” the legend on Lulu Organics Hair Powder.

I’ve been sending Ben Yagoda’s “Rules for Quotes” to a lot of people who probably wish I’d just shut up already. But a) it’s excellent advice from a language expert and b) for some reason, writing quotes is trickier than you’d think. Even if you’re in the business (*cough* *publicists*) of writing quotes.

You may have noticed that slut has been in the news a lot lately, thanks to a certain bloviator whose name rhymes with Flush Flimflah. (Not to brag or anything, but I was totally ahead of the slut curve.) Language mavens and cultural critics have been quick to offer analysis and opinion. I especially liked linguist Geoff Nunberg’s recent commentary on “Fresh Air”: “Maybe someday ‘slut’ will be as comically dated as ‘bounder’ or ‘cad,’” Nunberg observed. “But in recent times, it has actually become stronger and more offensive”—to the point that it’s sometimes spelled with an asterisk replacing the U. 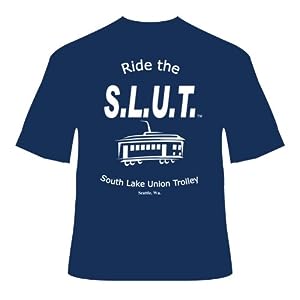 I’m predicting that “slut” will be on the short list for Word of the Year.

Would you buy a condo in a building named Vertigo? The very thought makes The Name Inspector a little queasy.

And speaking of queasy, not to mention crappy: 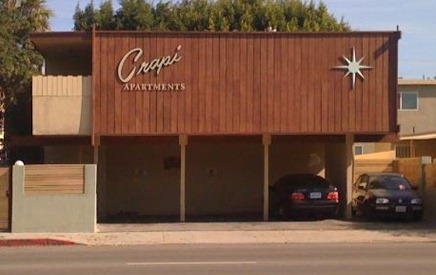 Yes, that’s Crapi Apartments, and no, it isn’t PhotoShopped. A dyslexic version of “Capri”? No budget for a proofreader? You tell me. The building is on Overland Avenue in West Los Angeles, and you can look it up. (Thanks, Judith!)

This reminds me of the time my brother's little league team was forced to play the first game with uniforms that had, " Clots" printed on the back. I suppose the word wanted was ,"Capri".