« Word of the Week: Stockist | Main | How the Countach Got Its Name »

Oh, those -ify and -ly names. So appealing! So verby (the former) and adverby (the latter)! So overdone!

The latest example arrived in my inbox last week. 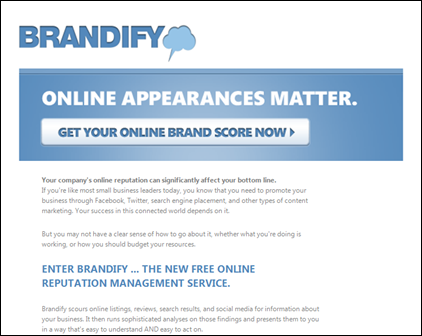 Brandify is a new service from Microsoft that’s “designed to deliver—in about 70 seconds—crystal-clear insight and startlingly simple guidance to our users about their businesses’ online and social media reputations.”

In a February 2011 post, “A Disturbifying Trend in Namifying,” The Name Inspector identified (see what I did there?) 16 coined names with the -ify suffix, from Adify to Zensify. I left a comment with eight additional names, including Abilify (the antidepressant/bipolar drug), Brickify (which turns images into Lego statues), and Yotify (no idea what it does). And I later wrote about “freshification,” the theme of an ad campaign from Pier 1 Imports. There’s also snackify and drinkify, unbranded coinages popularized by PepsiCo’s chairman and CEO, Indra Nooyi.

Meanwhile, -ly names continue their relentless redundifying. On Valentine’s Day (fittingly!), TechCrunch published news of Lover.ly, “an inspiration engine and Pinterest-like startup for weddings,” which had recently raised $500,000 from a group of investors. The About Us page defines “lover.ly” as an adjective and adverb: “having those qualities that inspire love, affection, or admiration.” What—no one’s humming along to Julie Andrews in My Fair Lady?

In a somewhat more high-minded vein we have Fundly, which calls itself “the largest online social fundraising platform in the United States.” Fundly is used by universities, clubs, nonprofit organizations, and politicians—including, in this presidential-campaign season, Rick Santorum.

By my count, that brings us to 48* startups with -ly names. I’d love to bring them together in a small room and force them to listen to my speech about distinctiveness in naming.

* I’m not counting, or linking to, the vilest example I’ve seen of an -ly name. Instead, I’ll turn over the podium to journalist Steve Silberman.

I was going to joking write something about "Snarkify" which is what the "Brandify" thing makes me... feel... in an adverby/verby fashion, but then I saw the last thing. And it's REAL!?!? I have suddenly lost my sense of humor.