In the last couple of weeks two acquaintances, both American, independently sent me tweets about belVita breakfast biscuits. The product has been sold by Kraft Foods subsidiaries in Europe for more than a decade and in the UK since 2010; it launched in the US last month with a pre-game ad on Super Bowl Sunday and a huge sample giveaway in supermarkets and to bloggers. (Not this blogger, however.)

Both of my Twitter friends asked the same question: “Doesn’t belVita… 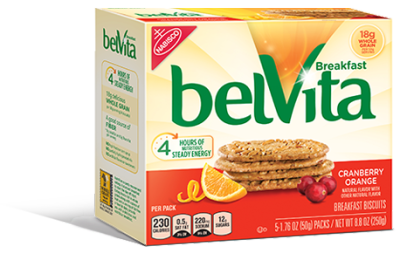 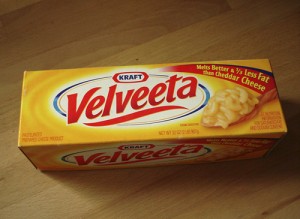 It sure does. And it’s especially odd when you consider that both products—one a cookie-like biscuit, the other a processed cheese food—are made by Kraft. (In the US, BelVita is sold by Nabisco, a Kraft subsidiary since 2000.) Velveeta, the cheese product that’s been around since 1927—some of it probably still in the original packaging and still a pristine, vivid orange—isn’t sold in the UK or Europe. But with belVita now crossing the Atlantic, won’t there be some confusion between the two brands?

True, the names have different etymologies: “Velveeta” is meant to suggest “velvet-smooth texture,” while “belVita” is a compression of bella vita, Italian for “beautiful life.” But in a radio ad, I’d challenge you to hear the difference in their pronunciation. It’s of particular concern in Spanish-speaking markets: in spoken Spanish, there’s virtually no distinction between “b” and “v.”

I can only surmise that when it introduced belVita in France, more than 10 years ago, Kraft (or Lu, its French subsidiary) didn’t plan for an eventual US launch and didn’t concern itself about the belVita/Velveeta confusion. But I’d love to hear from someone closer to the source.

So why, all these years later, didn’t Kraft just rebrand the product for North America? Again, I have no inside info. After all, it’s not as though it couldn’t afford to: total Kraft Food revenue in 2010 was $49.2 billion; and the belVita brand alone brought in $100 million. And I doubt it’s because of brand equity: I don’t suspect belVita has built up a huge following among Americans who returned from the UK and Europe clamoring for those exquisite breakfast biscuits they’d bought at Sainsbury’s or the hypermarket.

BelVita faces another marketing challenge: For several decades Americans have willingly consumed breakfast bars like Kellogg’s Nutri-Grain, but the breakfast biscuit is unknown on these shores. Indeed, to most Americans, a “biscuit” is soft and fluffy and served with gravy. (Alternatively, biscuits are for teething babies or for dogs.) BelVita biscuits are hard and crunchy and lightly sweetened.* To overcome Americans’ confusion, belVita’s US site goes into a lot more detail than the UK site about nutritional benefits and the “newness” of the product. According to a MarketWatch story about the US launch, belVita products will be sold in the reassuringly familiar cookie/cracker aisle, not with the dog biscuits.

As for Velveeta, if you’ve ever wondered how it’s made, an article by Veronique Greenwood in Discover magazine reveals all. Did you know there was Velveeta fan fic? Now you do.

* For more on British vs. American “biscuit,” I refer you to the authoritative Lynneguist of Separated by a Common Language.

Posted at 07:57 AM in British, Food and Drink, Naming, Pronunciation, Spanish, Trademark | Permalink

This could not mean, must not mean, that Kraft will retire Velveeta.

BelVita should be prepared to be called brekky biccy in England.

My father claimed to have named Velveeta (though I always thought it was in 1919) in an office contest at a Cleveland ad agency (Franklin Bruck, if i'm correctly remembering his curriculum vita) where he was a copyboy, and it never struck me as the sort of thing one would make up. He said it was his least favorite of three names he submitted (other 2 lost to time); who would find it appealing to visualize chewing velvet? He went on to a 25-year career in advertising and a 15-year career producing and writing for game shows on radio and tv. In his honor I prepare an astonishingly popular broccoli-Velveeta dish (well, that's not the right ingredient order) each Thanksgiving. Velveeta, for anyone interested in the food chain, is a technological marvel made by solidifying the whey remaining from the production of American cheese, which in turn is made from the leftover whey of virtually every cheese produced in Wisconsin.

This kind of situation is bound to happen in multinational mergers of consumer products companies. The confusion that the Velveeta/belVita marks provoke is not confusion as to the source, sponsorship, affiliation, or connection of the goods, because their origin up the corporate ladder is the same. Kraft wins no matter which product you buy! It's more, as you explained, an internal marketing challenge. But I'd guess the name recognition of the Velveeta mark was probably a major factor in bringing belVita to the US - calling to mind such a famous brand with impunity is a nice option to have.

@Dave Blake: True or apocryphal, your father's story is wonderful. Thanks for sharing it.

@Jessica: I knew you'd have some trademark wisdom to impart!

I can hardly wait for Emeril to market his own brand of packaged meat "products" and call it "Bam!"

The phrase "a cookie-like biscuit" must be equally confusing to British and American readers, but for different reasons.

The distinction between biscuit and cake was tested in the UK courts a while ago:
http://en.wikipedia.org/wiki/Jaffa_Cakes#Cake_or_biscuit.3F
On this basis, should (American) cookies be considered cakes?

While there could be Spanish dialects that preserve some distinction, in standard spoken Spanish (both Iberian and Latin American) there is no distinction at all between the sounds represented by the letters ⟨b⟩ and ⟨v⟩ (both are plosive /b/ or fricative/approximant /β/ depending on the surrounding sounds).

The belVita marketers were also very active on Twitter. Soon after I tweeted you about Kraft companies having Velveeta and the similar belVita, I got offered a free box, as did seemingly everyone who tweeted "belVita." (I didn't even have to contemplate if it would be "biscuit-ola" because I didn't want their 6 or 7 grams of sugar per ounce.)