Word of the Week: Uppertendom

Uppertendom: The upper classes; the richest people in a city. From “upper ten thousand.”

This excellent word was coined in the 1840s, but I discovered it only recently in Speaking American: A History of English in the United States, Richard W. Bailey’s account of American English from 1600 through 2000. In the middle of the 19th century, Bailey writes, slang “rose into the usage of New York’s upperten—a shortened form of uppertendom—for the richest ten thousand citizens.” 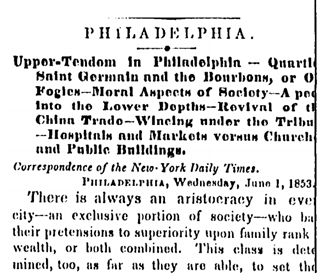 According to the OED, upperten came first, in 1846 (“Major Peyton Florence was held in great reverence by the ‘upper ten’”—A. J. H. Duganne, Daguerreotype Miniature). Uppertendom (originally spelled Upper Ten-dom) first appeared in print in 1848. The journalist and humorist Mortimer Johnson, who used the pseudonym Q. K. P. Doesticks*, took it one step further in a piece published in an 1855 collection: “I did go to a ball for the benefit of the poor—a two-dollar commingling of upper-tendom with lower-twentydom.”

The OED’s final citation for uppertendom is dated 1887. I say it’s time for a revival. Uppertendom is more accurate than “the 1 percent”—the greatest wealth in the United States is concentrated in the top tenth of 1 percent—and it’s more fun to say.

For more, read John McWhorter’s review of Speaking American in the New York Times Sunday Book Review. It contains this delightful sentence: “Bailey ventures peculiar conclusions that may be traceable to his having died last year, before he had the chance to polish his text.” Editing’s a little slapdash, too: I caught one instance of “flower” that should have been “flour.” But don’t let that keep you from reading the book.

* “Q.K.” stood for “Queer Kritter.” Not unlike our current era, the mid-1800s were a boom time for playful spellings and abbreviations, the most famous of which remains “OK,” shortened from “oll korrect.” I wrote about the history of “OK” here.

Posted at 07:26 AM in Books, Economy, History, Slang, Word of the Week | Permalink

Being from Chicago, I totally love the origin of "clout." Totes!

LIke! BTW, I've seen "sesesh" as another shortening of that word.

And I'd always subscribed to the Old Kinderhook theory of OK, based on a children's book about the presidents I once had. No doubt you saw that theory when you did your earlier post. WP sez:
"A year later, supporters of the American Democratic political party claimed during the 1840 United States presidential election that it stood for "Old Kinderhook," a nickname for a Democratic presidential candidate, Martin Van Buren, a native of Kinderhook, NY who was Andrew Jackson's protege. "'Vote for OK' was snappier than using his Dutch name."[5] In response, Whig opponents attributed OK, in the sense of "Oll Korrect," to Andrew Jackson's bad spelling. The country-wide publicity surrounding the election appears to have been a critical event in okay's history, widely and suddenly popularizing it across the United States.

@Diana: It can also be spelled "secesh."

In his book about "OK," Allan Metcalf definitively debunks the "Old Kinderhook" theory. He found the original citation for OK (= oll korrect) in the March 23, 1839, copy of the Boston Post. See my link in the footnote.