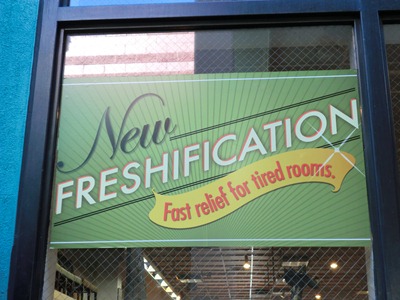 Nothing says “new” like a new word*, right? (Definition of “freshification,” according to the website: “Puts softness in & gets the blah out.” Ampersand sic.)

As I’ve noted previously in this space, “-ify” is one of the branding world’s suffixes du jour. The Name Inspector published a post last year about what he called “a disturbifying trend in namifying”; he cited Adify, Spotify, Predictify, and many other coinages. (In a comment, I wondered whether these names were created under the influence of the antidepressant/bipolar drug Abilify.) Pepsico’s CEO Indra Nooyi has is spoken enthusiastically about “the opportunity to ‘snackify’ beverages and ‘drinkify’ snacks.” Stephen Colbert had some fun with “snackification” in a January show.

But the home-décor sector is relatively conservative, and until “freshification” I hadn’t seen much evidence of wordplay at retail chains like Pier 1. The word, or the concept, seems to be having a positive effect: the company’s stock price and sales revenue have climbed—or climbified—over the last several months.

* Not 100 percent new: Freshify is a WordPress theme.