Last week the Brand New blog critiqued the new logo and ad campaign for the Lake Tahoe Visitors Authority, which has rebranded the lake’s south shore as “Tahoe South.” The review, which focuses on the typeface, is generally positive: “This is probably not the best destination branding job of the year, but definitely one of the best examples of commissioned lettering with a strong purpose.”

The review doesn’t mention the new tagline, “Get Your Vacation On.” Here’s the tag in an ad: 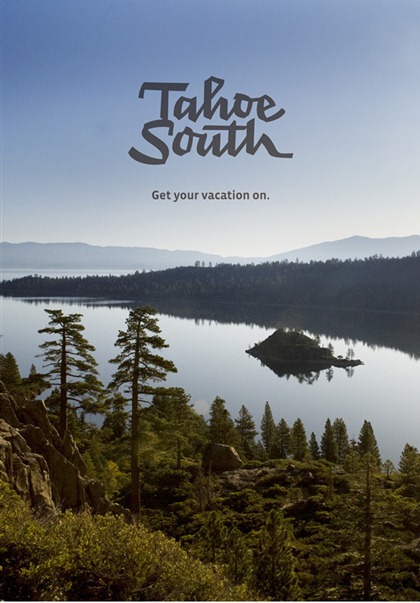 “Get Your Vacation On” is a new twist on a formula whose contemporary source is “Get your groove on” (“to get something going,” e.g., “to dance”) from the early to mid-1990s. In her textbook African-American English: A Linguistic Introduction, published in 2002, Lisa J. Green noted that “get one’s X on” was “extremely productive.” Among the examples she listed: get my chill on (“to rest”), get my eat on (“to eat”), and get my praise on (“to worship”).* Green doesn’t include a much earlier example, “get your habits on,” which was discussed in the American Dialect Society’s listserv in 2005. “Get Your Habits On” was the title of an 1899 song that inspired many sequels and imitations, including one sung by Bessie Smith in 1933 (sample lyric: “I like you when you got your habits on”).

The Washington, DC, go-go band Rare Essence recorded “Get Your Freak On” in 1995; the Missy Elliott song from 2001, “Get Ur Freak On,” is unrelated.

The 2003 remake of Freaky Friday used “Get Your Freak On” as a tagline.

“Get your freak on” can be sexual or non-. An example of the former: Last October, a TSA agent added a handwritten note—“GET YOUR FREAK ON GIRL”—on a luggage-inspection notice given to a female passenger whose bag contained what she later described as “a personal item.” The passenger was a blogger, so the note found its way to Gawker.

Some non-freaky twists on the formula:

* Thanks to Stan Carey and Ben Zimmer for the link to African-American English.

Posted at 07:34 AM in Advertising, Slang, Sloganclones, Slogans and Taglines, Snowclones, Travel | Permalink

While not the origin of "get your drink on," the 2007 Will Ferrell "The Landlord" video from his Funny or Die site might have helped popularize the term with a broader audience. A 2-year-old (swearing) landlord says she needs Ferrell's rent right away because "I need to get my drink on" (01:46-01:51 http://www.funnyordie.com/videos/74/the-landlord-from-will-ferrell-and-adam-ghost-panther-mckay).

This list must include "Get Your War On," the glorious comic strip that debuted in 2001: http://en.wikipedia.org/wiki/Get_Your_War_On