Here’s a twofer: a full-page ad from Corning in the January 22 New York Times Sunday Magazine that features a snowclone and a nouning. 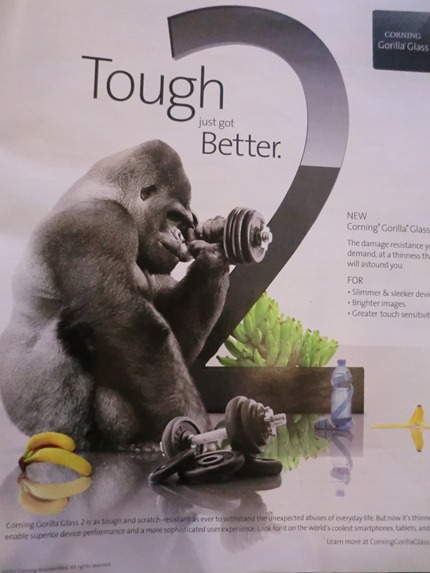 (For new visitors to Fritinancy: a snowclone is a particular type of formulaic cliché, the original of which was “If Eskimos have N words for snow, X surely have Y words for Z.” Scores of snowclones have been documented; for a comprehensive list, see the Snowclone Database. I’ve written from time to time about snowclones in advertising.)

The snowclone here is “X just got better,” a formula frequently employed by headline writers short on time and imagination. (“The Best Flying Toy Just Got Better”; “Your Chances of Getting Hired Just Got Better”; “Dodge Ball Just Got Better.”) It has also made it into the trademark database. Here are some of the slogans I spotted:

Garlic Just Got Better (for a distributor of black garlic)

Your Weather Just Got Better (for Weatherbug, a forecasting service)

Life Just Got Better (for home entertainment and security systems)

Fishing Just Got Better (for a maker of fishing lures)

In all of these examples, “just” is a constant: It suggests breaking news, breathlessly imparted. Get it while it’s hot!

As for the nouning in the Corning ad, it’s the use of “tough” as shorthand for “the quality of toughness.” This particular adjective-as-noun device has been turning up a lot in ads lately. See, for example, Lexus’s “Engineering Amazing,” AT&T’s “Rethink Possible,” and Chex Mix’s “A Bag of Interesting.” On the American Dialect Society’s email list, Jonathan Lighter recently noted “Leave ordinary behind” (for South Africa tourism), “Tired sucks” (for 5-Hour Energy drinks), and this string of nouned adjectives in a Grant Thornton ad: 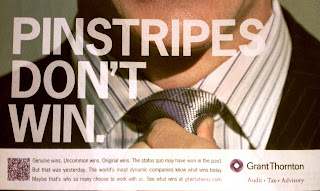 Back to the Corning ad: Although the headline recycles a shopworn formula and the photography is cluttered and confusing (reflections! gradients! bananas!), I admire the name and the concept. “Gorilla Glass” is a vivid and effective apposition of strength and fragility, and the alliteration makes it fun to say. This brand is a gorilla in the room that isn’t likely to be overlooked.

Posted at 09:06 AM in Advertising, Anthimeria, Sloganclones, Slogans and Taglines, Snowclones | Permalink

Nouning... That is the word that describes the annoying trend in word punishment that has been ticking me off. Thanks!