Word of the Week: Skijoring

Skijoring: Cross-country skiing with the assistance of dogs (or, less commonly, horses). Sometimes spelled as two words: ski joring. Anglicized from the Norwegian ski-kjøring, “ski-driving.” The English word is pronounced with a hard j (sk

ng); in Norwegian, the j is pronounced like y. 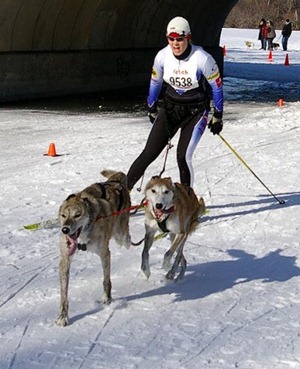 Photo from the 2011 Chuck & Don’s Skijoring Loppet by Keith Jones, via Flickr.

Scandinavians, eschewing sleds, would put light harnesses on reindeer and dogs, then, wearing their cross-country skis, they attached themselves to these animals to score a quick boost for winter travel. …

For effective skijoring, the animal should weigh at least 30-35 pounds. It can be almost any breed -- border collies, golden retrievers and Irish setters have all been successfully trained. However, northern breeds such as huskies and malamutes are preferred. The human participant should have a good level of cross-country-skiing experience -- the more, the better. Skaters do best at skijoring on groomed courses, but diagonal striders also can skijor; in fact, that gait is commonly used on rougher trails or wild snow.

Skijoring races are held around the world. The US national championship race, Chuck & Don’s Skijoring Loppet, will be held next Saturday, February 4, in the Minneapolis-St. Paul area. (Loppet is a Swedish word that refers to a large, long-distance cross-country ski event, usually more than 35 kilometers.*) The championship race is a 7k one-dog competition; other events include a 14k two-dog event and 2.5k and 4.5k races.

Posted at 07:32 AM in Animals, Sports, Word of the Week | Permalink