Word of the Week: Parklet

Parklet: A small city park created by replacing one or two parking spaces, or an unused bus stop, with a platform on which planters and other amenities are installed. The parklet is publicly sanctioned but constructed and maintained with private funds. 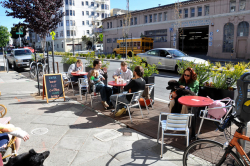 Parklets have been built in several US cities but have been most successful in San Francisco, where since 2009 22 parklets have been created; they have thrived there despite the chronic shortage of parking spaces in the 49-square-mile city. According to San Francisco Chronicle urban design critic John King, six more parklets have been approved and 44 are “in various stages of review.” Across the bay, Oakland has created a pilot program for parklets and is accepting applications from business owners and other eligible parties. (My own Oakland neighborhood may become home to one of the new parklets.)

In a December 29 column King called parklets “the most significant change to San Francisco’s landscape in 2011.” In an October article, “Life in the Slow Lane,” Architectural Record called parklets “the ultimate revenge on the modern city: one less parking space, one more park.” Not everyone is a fan, AR continues:

The parklets have drawn criticism, from similar circles that fought and killed a proposal for food stands in the city’s beloved Dolores Park and continue to battle the notion of POPOS (privately owned public open spaces) in downtown. Opponents argue that a parklet’s extra seating is a revenue generator veiled as public good. Then there’s the occasional voicing of the car driver’s plight. One more parklet, after all, means two or three fewer places to park. …

While the city loses an estimated $5,000 per year in parking fees for each spot (and meter) removed, it gains an array of public gathering places. Built independently, quickly, and cheaply—usually between $7,000 and $20,000, often with materials and funds donated by neighbors—each parklet is defiantly unique, from Four Barrel’s bike rack-cum-garden trellis to Terroir wine shop’s planned bocce ball court.

Read more about Pavement to Parks. Read John King’s article in the Chronicle, which includes a photo gallery and a tour of every San Francisco parklet now open.

Posted at 07:53 AM in Architecture, Neologisms, San Francisco, Trends, Word of the Week | Permalink

Here in Canada we have long used the term parkette, and would call such spaces that. The city has also taken street parking space to install Bixi rental bike stands, which most Montrealers view as a good move.

This morning I noticed two of these on my way to work. First time I've seen them. SO CUTE. That was my reaction. Not scholarly, but visceral:).