This Is Gonna Hoit

The Hyundai Equus evidently does not travel by way of Toidy-Toid and Toid. 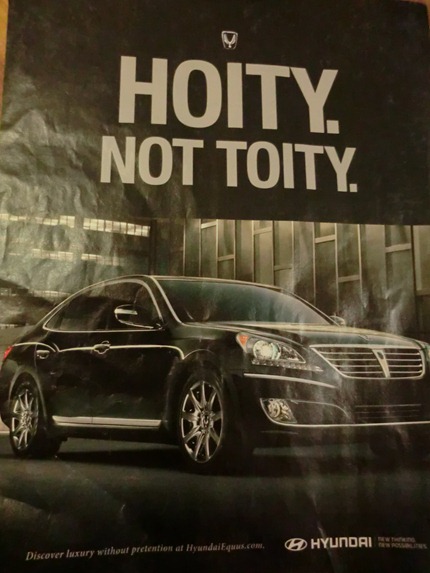 I’ll say this much: I stopped and stared.

As one would at a bridge collapse.

The reference here is to hoity-toity, a relatively rare modifier (and, occasionally, noun) that nowadays usually means “haughty” or “putting on airs.” The expression dates back to the 17th century and may be derived, according to the OED, from the obsolete word hoit, “to indulge in riotous and noisy mirth.” (Hoit is related to hoyden, a boisterous girl.) Toity was added for rhyming fun, in the word-forming process known as reduplication. (From The Phrase Finder’s page on hoity-toity: “As with other reduplicated phrases, one word carries an existing meaning and the other is added for emphasis.”) Hoity seems to have taken on additional shades of meaning because of its echo, in some dialects of English, of “high,” and of the first syllable of the frequently misdefined hoi polloi. (It’s Greek for “the common people,” not “the upper class.”)

So if toity is a nonsense word—or baby-talk for “toilet,” or Brooklynese for “thirty”—then what does the Hyundai headline mean? “We’re half-fancy”? Or maybe, “Pay no attention to the headline—just gaze intently at the photo”? I have no idea.

And don’t get me started on Equus as a car-model name. Sure, it’s no longer weird to think of cars being named for horses (see: Mustang, Bronco). But this horse? Neigh.

Well, the teenage patient in the play does sing a lot of advertising jingles.

By the way, did you catch the call to action at the bottom of the Hyundai ad?

Not to get all hoity-toity about it, but the word is spelled pretension, not pretention. No ifs, ands, buts, or “occasional variants.” Pretension.

Posted at 07:48 AM in Advertising, Cars and Motorcycles, Naming, Slang, Spelling, They Said WHAT??? | Permalink

I don't know. The idea that the car is mirthful (hoity) but without the unnecessary added silliness (toity) makes a little sense to me.

Maybe they fell for the "haut toit" -- French for "high roof" -- story of the etymology of the phrase. If so, you can stretch the metaphor to mean that the car is high (in quality), but there's no (metaphorical) ceiling to what it can do.

It would work better for a convertible, though. (No toity = no roofy.) And if hoity-toity actually came from the French haut toit.

Interesting that hoity-toity used to mean the opposite of what it does now. I like the explanation given at The Word Detective (http://www.word-detective.com/020403.html#hoity-toity) for the change. No mention of French roofs or convertibles, though :-)

Usually I agree with you. This time I don't. I think I "get" the ad: The car is classy without being snooty.
Etymologically, it is nonsense. "Toity" may well be a word that just fills a sound-void, and one that lacks any meaning on its own.

But in the vernacular I think "hoity-toity" has come to mean upper-class snobbery. Thus, take away half of the "hoity-toity," give the copywriters the benefit of the doubt, and you get classy sans snobbery.

This is a lot more analysis than a stupid car ad deserves, but I felt it appropriate to come to its defense, just this once.

Thank you so much for mentioning the word hoyden, a word I haven't heard much in recent decades; the nuns used to sling it at us in eighth or ninth grade. It kicked off a whole train of memories about nuns that are surprisingly funny in retrospect.

Oh dear. Oh dear. Don't big Asian companies hire Americans to steer them away from dunderheaded cultural references? Wonder if the "toity"add-on had any source in Cockney rhyming slang?

@Diana: I found no evidence of a Cockney link for "hoity-toity" -- that is, it isn't a coded reference to another term. (Cockney "trouble and strife" = wife.) Hoity-toity is simply reduplication like "fancy-shmancy."

And culture is no excuse. Hyundai is by now almost as American as Ford: it has US headquarters in Michigan and a plant in Alabama. Its ad agency, Innocean, is based in Huntington Beach, California.

I am continually astonished by companies who pour gobs and gobs of money into a fancy ad campaign (which despite whatever they say is certainly pretentious) and somehow forget to hire a copyeditor, or even a literate proofreader. Jeesh, they don't even bother spell-checking the ad copy! It's all about image and design; nobody seems to give a damn about the words.