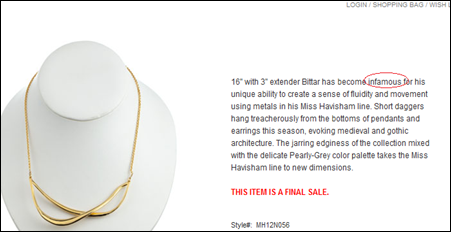 Jack the Ripper was infamous. Bernie Madoff is infamous. Alexis Bittar—a charming and talented jewelry designer whom I once met at a Saks Fifth Avenue trunk show—is not infamous. What he is is famous (First Lady Michelle Obama is a fan) if not yet quite a household word.

The Bittar copywriter made a surprisingly common error: assuming that the addition of in- to famous would create a superlative meaning “intensely famous.”* As I wrote in a May 2008 post, infamous is never a favorable word; it means “notorious, ill-famed, having an exceedingly bad reputation.” In legal contexts, it may mean:

a. Punishable by severe measures, such as death, long imprisonment, or loss of civil rights.

b. Convicted of a crime, such as treason or felony, that carries such a punishment.

And speaking of treason, I’d also have suggested a substitute for treacherously in the second sentence of the necklace copy. The word means “hazardously” or “in a manner capable of betrayal”; in this context it suggests, all too unpleasantly, “puncture of the carotid artery by means of pointy costume jewelry.” I think what’s intended here is something closer to “enticingly” or “thrillingly.” Or maybe the little daggers “quiver” from pendants, suggesting not only their delicacy but their resemblance to arrows.

* Likewise, some people seem to think that penultimate means “the pinnacle of ultimate,” when in fact it means “next to last.”

Yes, the “That Word” reference is to The Princess Bride, which turns 25 this year. Inconceivable!

Have you seen The Three Amigos?

"The Miss Havisham line" - say WHAT? And yet they managed to use the correct "palette." What are the odds, given the rest of the copy?

Given that they've already gone with "Miss Havisham" (for those stylish associations of abandonment, despair, madness and revenge), perhaps "treacherous" fits in after all.

@Elisa: Hah! No, I'd somehow missed it. I've updated the post to make up for that oversight!

And along the lines of "penultimate," let's not forget the use of "epicenter" to mean "the REAL center."

With the use of "infamous," "Miss Havisham," "daggers hanG treacherously," and even "jarring edginess," I personally like the last line.

"THIS ITEM IS A FINAL SALE."