An enthusiastic tweet by food maven Ruth Reichl sent me searching for information about Eggslut, which Reichl called “an insanely good breakfast truck, parked on Fairfax in L.A.” Sure enough, Eggslut’s the name, and the proprietors aren’t ashamed about it. 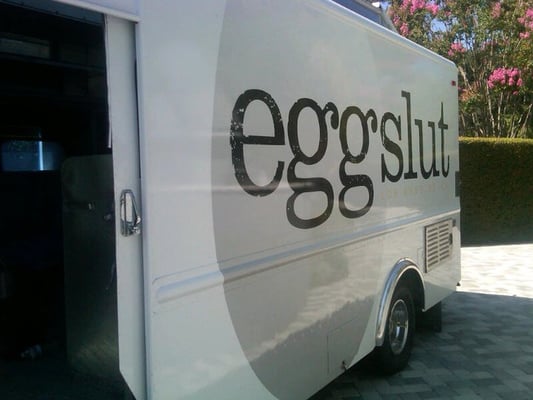 Slut has been getting around in brand names. I’d already known about Bookslut, an online literary magazine that’s been publishing since 2002. A little research turned up a dormant blog called Adventures of a Food Slut, whose curator explains: “I was initially going to go with ‘food whore’ until Brad pointed out that ‘whores do it for the money, but sluts do it because they like it’. Awesome.”

Then there’s SlutWalk, a protest march that originated in Toronto in April 2011 and spread to other North American cities. A sample manifesto:

SlutWalk NYC is part of a worldwide grassroots movement challenging rape culture, victim-blaming and slut-shaming, and working to end sexual and domestic violence. 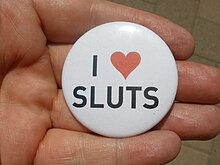 And in the world of lower-case sluts, Word Spy devotes an entry to brand slut: “a customer with no loyalty to a particular brand.” The earliest citation, in the Sunday Telegraph (UK), is dated November 20, 2005.

There’s a large dose of shocking-the-bourgeoisie in all these examples. The generally accepted definition of slut—even in Urban Dictionary—is “a promiscuous woman” or even (sorry, Food Slut) a prostitute. The word’s origin is uncertain—it has cognates in several Germanic languages—but when it entered English around 1400 it meant “a dirty, slovenly, or untidy woman,” and that meaning has hung on. Since the mid-1500s, it’s also meant “a bold hussy” and “a woman of loose morals.”

I’m obliged to mention that slut has enjoyed an alternate history: One definition, according to the OED, is “playful … or without serious imputation of bad qualities.” Samuel Pepys used slut in this way in a 1664 diary entry: “Our little girl Susan is a most admirable slut and pleases us mightily.” The OED has several other “playful” citations dating into the mid-19th century.

This kinder, gentler slut is not what the slut-brands are about, though. The Eggslut and Bookslut names say: “We don’t just love eggs/books, we lust them!” And SlutWalk reclaims and brandishes the word, following the example of gays and lesbians who reclaimed queer and technophiles who embraced geek (which originally meant “fool” and later “a circus freak”). All these brands also use slut as a litmus test: if you’re appalled by our name, you can eat/read/march somewhere else, because you’re not One of Us.

It may not be a stretch to trace the normalization of slut to original-cast Saturday Night Live and the Point/Counterpoint feature of late-1970s Weekend Update, in which Dan Aykroyd’s bombastic replies to Jane Curtin would routinely begin “Jane, you ignorant slut.” A 2008 episode of The Office assumed that viewers knew the reference.

“Ignorant,” however, doesn’t apply to the new generation of brazen, brand-savvy sluts. They may be wild and crazy—to borrow another SNL-ism—but they’re smart, and even virtuous, about marketing.

Posted at 07:55 AM in Books, Naming, Restaurants, Trends | Permalink

I have a friend who refers to herself as a conslutant.

One of my favorite old phrases is "slut's wool" for what many people call dust bunnies. I have lots of slut's wool in my house, so I get to say it fairly often.

I read hundreds of 19th century newspapers per week. "Slut" has popped up a few times as a synonym for "bitch," a female dog. "Mr. Pope has a fine coon dog slut ready for breeding."

In the "enthusiast for X" category, "chorus slut" is pretty common parlance for those of us who can't stop joining singing groups.