We’ve been seeing a lot of this: 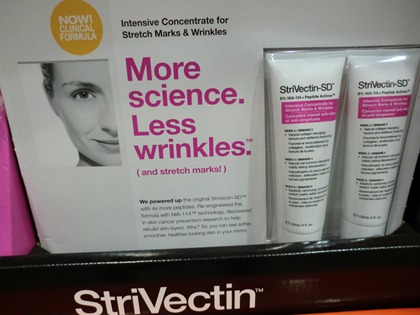 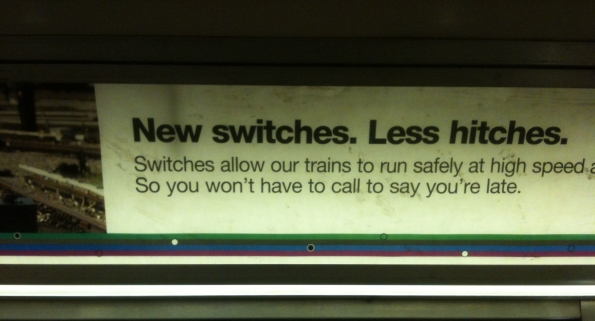 And let’s not forget the Mercedes “less doors” ad, which I wrote about in November.

So it was mildly amazing (as presidential candidate Newt Gingrich is fond of saying) to see this ad in the New York Times today: 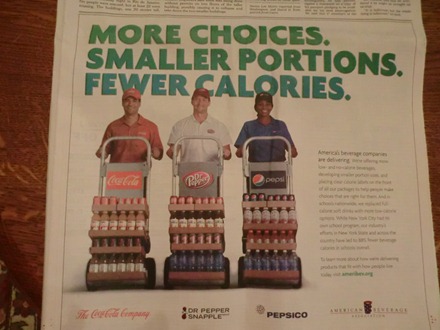 Of course, as count nouns go—nouns that can be modified by a numeral and which occur in both singular and plural form, and which therefore “require” fewer—you can hardly get more countable than “calories.” But there’s another consideration: When you’re peddling expensive sugar water, you want to project a virtuous image. The beverage folks could have gone with “less”—as Stan Carey points out in his language blog, there’s plenty of historical precedent for that choice—but then they would have risked the wrath of traditionalists.* No one will write angry letters over the choice of “fewer” here. Sugary sodas: the wholesome, grammatical choice!

* In the body copy of the ad (too small for legibility here), there’s another “fewer” that strikes my ear as hypercorrect: “While New York City had its own school program, our industry’s efforts in New York State and across the country have led to 88% fewer beverage calories in schools overall.” (Emphasis added.) Percentages are generally included among the exceptions to the less/fewer “rule” (more like a guideline); since the reference here is to a decrease in aggregate calories, I’d have gone with “less.”

Posted at 08:44 AM in Advertising, Beauty, Food and Drink, Grammar, Writing | Permalink

Actually, I'd say you can get more countable than calories. Though "calories" is a plural noun and thus countable, it's a unit of measurement that refers to something that's technically a mass, like "miles" or "hours." So you could make the argument that "less" is actually more fitting. I'd definitely go with "88% less," though.

This is fantastic. My favorite example of this trope comes from the car dealers: "Over 50 models under $10,000!" When I used to copy edit ads for a local newspaper, I went back and asked the sales rep if we could change it to "more than" and "less than," and I think he had to knock off early that day to go have a drink.

@Jonathon: Oh, I was just making a little joke about "counting calories." Pretty weak, I admit!

@Nancy: I'm sure I would've gotten it if I weren't feeling so sleep-deprived at the moment. :)

I think the "counting calories" phrase is so commonly used that you can get away with saying "fewer calories" even though technically it should be incorrect. As for the wrinkles, if you're going to say "fewer wrinkles" you might have to defend yourself from some irate customer who thought that four heavy wrinkles was more than twelve barely noticeable ones.

On a trip to Pittsburgh, I was delighted to see signs reading "Ten items or fewer" in the Giant Eagle supermarket. I asked to see the manager. I wanted to shake his hand.