« On the Visual Thesaurus: Branding the Umlaut | Main | Word of the Week: Grandiosity »

There was another Republican presidential debate last night—the 473rd of this primary season [ed: pls fact-check]—and another primary election will be held tomorrow, in South Carolina. Four candidates remain from the original field of nine. Before any more candidates “suspend” their campaigns, to use the fashionable euphemism, let’s take a look at an aspect of the electioneering that hasn’t received much attention: the slogans.

A quick survey of the slogans of the no-longer-running:

Get America Working Again: Texas Governor Rick Perry opted for the imperative voice and a cheerleading, roll-up-your-sleeves tone. “America”—check. “Again” was Perry’s twist on the re- theme: the word implies that nothing has worked since Obama’s election. Perry dropped out of the race on January 18.

Country First: Former Utah Governor (and US ambassador to China in the Obama administration) Jon Huntsman brought out this slogan in early January—and dropped out of the race less than two weeks later. “Country First” was meant to justify Huntsman’s national service under a—gasp!—Democratic president: Country, not party, first. Curiously, Senator John McCain used the identical slogan in his losing 2008 bid for the presidency; McCain’s subtext was his military service and imprisonment as a POW.

Restoring Constitutional Conservative Values. That tongue-twister was Sen. Michele Bachmann’s slogan until she changed it, late in her candidacy, to “American Jobs, Right Now.” The original over-earnest slogan included a re- word but omitted “America.” Switching to a jobs-focused slogan (with “right” shoehorned in to let you know where she fits on the political spectrum) made Bachmann sound like a labor leader with a single-plank platform. She ended her campaign January 4.

Beat Him with a CAIN. Herman Cain, the former chief executive of Godfather’s Pizza and a first-time candidate for anything, used a revolving set of slogans that seemed modeled more on fast-food advertising than on presidential aspirations. Cain’s campaign also came up with “OMG—Obama Must Go” and, of course, the famous “9-9-9” mantra, which represented Cain’s tax plan. Cain suspended his campaign on December 3.

A Time for Truth. Former Minnesota Governor Tim Pawlenty broke the rules: no “America,” no re- word. More shocking still, he invoked truth in an era of truthiness. He launched his campaign last May and withdrew in August. Nice alliteration, Governor.

And here are the slogans of the candidates still standing:

Rebuilding the America We Love. Newt Gingrich’s slogan and early ads evoked a sunny, small-town America. (Things have turned darker of late, with the Speaker lashing out after revelations about his complicated romantic history.) The slogan includes both “America” and a re- word, as well as a cozily inclusive pronoun and a verb. The choice of verb is interesting: Gingrich is on the record as saying his marital infidelities were “partially driven by how passionately I felt about this country.” Newt: a lover, not a fighter? (Compare Romney and Santorum, below.)

Restore America Now. US Senator Ron Paul’s succinct slogan meets the minimum requirements: a re- word, “America,” and a sense of urgency. Paul’s plan for restoring America involves restoring the gold standard and right-to-work (i.e., anti-union) laws and getting rid of most governmental functions. (But he’s OK with marijuana, so there’s that.) Like Herman Cain, he shows a playful, punning side: his outsourced blog is called “Paulitical Ticker.”

Believe in America. Former Massachusetts Governor Mitt Romney repurposed this slogan from the subtitle of his 2011 book, No Apology. Asking voters to “believe” seems to be setting a rather low bar, but the verb sends a message to religion-obsessed conservatives that Mormon Mitt, like the Monkees, is a believer. Given that Mormonism is a non-mainstream denomination, “belief” is certainly going to be a topic for discussion in this campaign. Of course, so are Romney’s taxes, his income, and his less-than-lifelike mien. Romney’s PAC is called Restoring Our Future, a bit of linguistic illogic that seems crafted to capture both the backward-looking re- constituency and the people who think there are a few buttons on the remote besides “replay.”

For a while, Romney was using “Keep America America” in his stump speech. (That’s the double incantation I referred to earlier.) The slogan was misinterpreted as “Keep America American,” used by the Ku Klux Klan in the 1920s. Even as Romney intended it, the phrase is perturbing: It suggests an invasion of alien ideas (or actual aliens) that must be defended against.

After I began researching the candidates, this ad kept retargeting me: 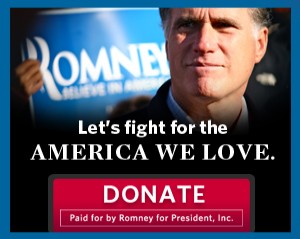 “Let’s Fight for the America We Love”—as opposed to, say, That Other America—overlaps with the “love” part of Newt Gingrich’s slogan (see above) and the “fight” part of Rick Santorum’s (see below).

The Courage to Fight for America. Former US Senator Rick Santorum is the only candidate who uses a declarative sentence fragment as his slogan. Naturally, the slogan includes “America”—but instead of restoring or rebuilding, Santorum says he’s fighting. (Note: Santorum has never served in the military, but this week his website has been asking supporters to “moneybomb.”) Calling yourself “courageous” suggests that your opponents are, well, the opposite. With some audiences, Santorum also uses “Faith, Family, Freedom” as his slogan; the alliteration is catchy, and putting faith first is an accurate representation of this devout Roman Catholic’s priorities. It may have helped him win the recent endorsement of a group of evangelical leaders.

One final note: Humorist and Colbert Report host Stephen Colbert has joined the fray, sort of, with a super PAC, “Americans for a Better Tomorrow, Tomorrow” and a slogan, “Making a Better Tomorrow, Tomorrow.” No re- word backward looks for our man Colbert: He finds tomorrow so nice he’s named it twice! (It could also be that Colbert, who has starred in a Sondheim musical, is inspired by the anthem from Annie. We love ya, tomorrow!)

Colbert jumped in too late to get his name on the South Carolina primary ballot, so he’s endorsed Herman Cain (the endorsement ad is titled “Not Abel”). Cain is, of course, no longer running. Watch some Colbert campaign ads.

Or you can just go with the putative front-runner:

New Yorker cartoon by Paul Noth. Evidently the otherwise fastidious New Yorker no longer minds that “all right” is spelled here as a single word.

For those of you keeping score, yes, the title of every blog post this week has begun with a participle. Vote for Fritinancy: The Courage to Love Consistency. And America, Too.

Posted at 07:49 AM in Politics, Slogans and Taglines | Permalink

In the spring of 2009, when the first version of Obama's health insurance legislation was introduced, a group I belong to (rank-and-file railroaders, which is what I was before retiring) started getting emails from a member who hadn't previously been heard from. She was very distressed about "death panels" and "government health care" and didn't seem to grasp the difference between care and insurance, which turns out to be a widespread confusion; she also kept using the phrase "take our country back." Along with the ambiguous "our," the "take… back" construction got my attention, because it seemed to ignore the fact that we had just had an election and the people who won had barely had a chance to hang up their coats and find the washroom. But the odd timing may just mean that this was a return of a fairly old theme on the American Right: "they" have captured control while "we" were distracted or in disarray, so the most urgent task must be to restore [NB] the right order of things. I was amazed to learn recently that the John Birch Society is still doing business at the old stand; you'd think they would have been forcibly suppressed during the two terms of Eisenhower the Communist agent, or alternatively that with the collapse of the Soviet Union they would congratulate themselves and take up golf, but apparently the Republic can exist on the knife edge between survival and destruction for nearly sixty years without tipping either way.

I'm not sure exactly what you mean by "Santorum is the only candidate who uses a declarative sentence fragment as his slogan." Paul and Romney's slogans are clearly imperatives, but what about Gingrich's "Rebuilding the America We Love"? Since they're not complete sentences, it's hard to classify their grammatical mood (declarative, imperative, or interrogative) with any real certainty, but I don't see what makes "The Courage to Fight for America" any more declarative than "Rebuilding the America We Love."