Grievance the First:  Just about everything about this “poem” makes me cringe. 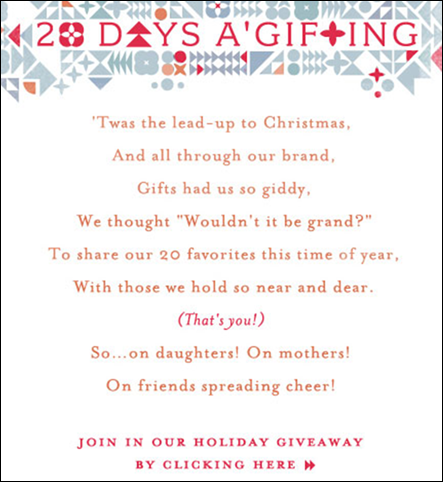 Specifics: 1. It’s “a-gifting,” with a hyphen, not an apostrophe. The a- prefix is a remnant of an Old English particle, ge-, that marked past participles. 2. ’Twas-ing is just as bad as ’tis-the-seasoning. 3. “All through our brand”? Yeccch. 4. There’s a missing comma after “We thought.” 5. Most grievously, if you’re going to parody a well-known poem, at least get the freakin’ meter right. UPDATE: As commenter Jan Freeman points out, the question mark should follow “near and dear” and not “be grand.” 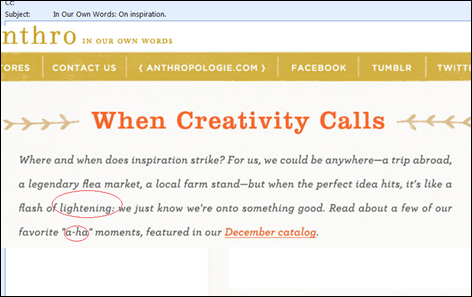 1. The meteorological phenomenon is “lightning.” “Lightening” is the opposite of “darkening.” 2. No hyphen in “aha.” In this case, a is not one of those Old English remnants.

Grievance the Third: L.A.’s Getty Center has a prestigious pedigree, an impressive collection, and a huge budget, but apparently not enough time or money to hire a proofreader for this mural in the museum’s restaurant. 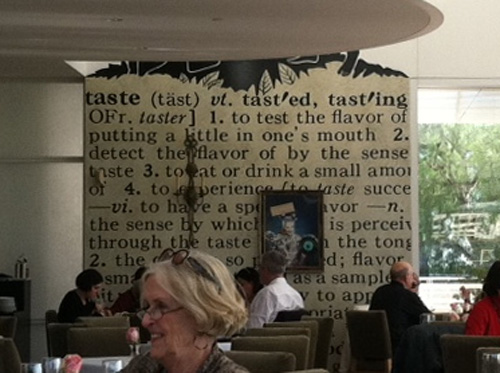 Catch that? Drew at Back of the Cereal Box did: In English, “taste” is pronounced with a long A, \tāst\. On the mural, however, there’s a dieresis over the A, indicating a broad-A pronunciation: tahst.“One would imagine that the Getty would exercise enough curatorial control to ensure that the first line, at least, read correctly,” says Drew.

And no, “Taste” is not the name of The Getty’s restaurant. The eatery is called … the Restaurant. The more-casual café is called—don’t get ahead of me now—the Café. Oh, the missed opportunities.

Grievance the Fourth: Wand or Wang? 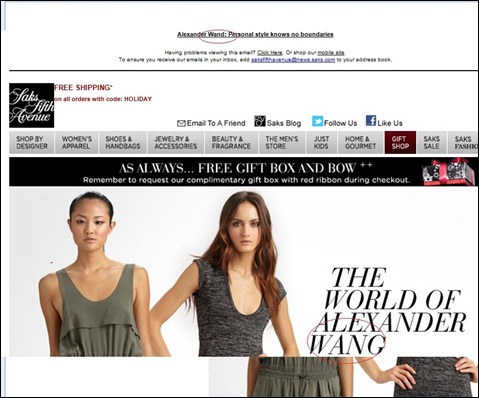 Get it straight, Saks.

Grievance the Fifth: Once upon a time, Saks Fifth Avenue stood for class and quality—for tahst, you might say. Nowadays I could devote an entire blog to the retailer’s sloppy copy. (See here, and here, for example.) This spelling error appeared in a print flyer. Yes, print. Where was the proofreader?

A peak is a mountain. A peek is a glimpse.

Hat tip to Jessica Stone Levy, who tweeted the photo.

Grievance the Sixth: This KFC Australia ad was created not by an assistant chicken-fryer’s nephew, as you might surmise, but by Ogilvy Sydney. Major client, major agency. Major mistakes. 1. Extra space after “Made from.” 2. Missing hyphen in “whole-breast.” 3. Superfluous comma after “breast.” 4. Misspelled “complemented.” 5. What’s up with that jittery typeface? (Via Copyranter.)

Grievance the Seventh: A special Cast-in-Bronze Award to the Oregon Shakespeare Festival’s development department, which should use some of its acquisitions to acquire a proofreader. 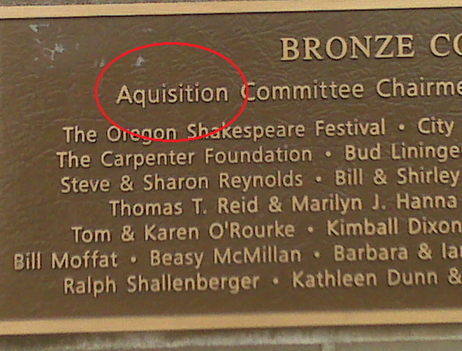 Snapped on a very public street in Ashland, Oregon.

Happy Festivus to all, and to all a good airing!

Here’s another take on the Airing of Grievances from As a Linguist, who asks, “When did it become so damn hard to wish someone a Happy Whatever-You-Celebrate?”

Also, in Grievance the First, shouldn't that question mark/close quote come a couple of clauses later? "Wouldn't it be grand/To blah blah blah/with those we hold so near and dear?"

Ugh—that poem was terrible. Does nobody know how to write metrical poetry anymore?

Thanks for the link! I appreciate it even more coming from someone whose grievances I share. The peak/peek error is going to leave me twitching for the rest of the day!

All I could think (besides 'Ew' in general) was "Oh, nice. *Whose* hand was breaded?"

And was it breaded mechanically, or hand-breaded?

My favorite "a-ha" moment would be the "Take On Me" video ... What, no takers for early MTV humor?

Anyway, well done, thanks for the hat tip, and let's NEVER merry!

I think finding this site has been a Festivus gift to me from... I don't know!
OK, but it's still a gift.

Belated, but worth posting anyhow: Thanks for the link. And thanks for validating my anger.