The A.V. Club looks back at the year in band names. It was a good year for punctuation themes: W-H-I-T-E, Friend Slash Lover, TL;DR. (Hat tip: Henry Alpert.)

In Word Routes, Ben Zimmer looks at the year in words. His list partially overlaps mine, but he also singles out a few I didn’t catch: twinkling, lip dub, and narb, for starters.

A different take on words of the year: Merriam-Webster reports on the words that spiked in online lookups over the last 12 months. From April 15: ersatz, after the US Postal Service admitted that the new Statue of Liberty stamp mistakenly features a photograph of the half-size replica at the New York New York Casino and Resort in Las Vegas.

Laura Wattenberg of  Baby Name Wizard announces the name of the year for 2011. It represents, she writes, “the rise of the virtual name.”

Why are informers called “rats” and spies called “moles”? The Explainer, at Slate.com, explains.

Trendwatching’s list of “12 crucial consumer trends for 2012” includes, as usual, some over-the-top coinages, including flaw-some (“To consumers, brands that behave more humanly, including exposing their flaws, will be awesome”), eco-cycology (“Brands will increasingly take back all of their products for recycling … and recycle them responsibly and innovatively”), and emerging maturialism (“Expect frank, risqué or non-corporate products, services and campaigns from emerging markets to be on the rise”).

Last year the Sunlight Foundation, a nonpartisan organization that lobbies for government transparency, published a tongue-in-cheek name generator for political action committees (PACs). The generator randomly spews out names like Fanciful Floridians Against Cruella de Vil and Captains of Industry for Growth—names you’d never expect to see in real life. Except … it turns out that dozens of real PACs lifted their names from the Sunlight Foundation generator.

Linguist Lauren Gawne, who blogs as Superlinguo, recently presented what may be the world’s first academic paper on LOLcats and language. (“Don’t call it kitty pidgin!”) Watch the presentation.

Speaking of linguists doing cool stuff, Erin McKean wrote earlier this month about “the secret language of bros”—aka the dudeification of English—for the Boston Globe. “Perhaps the most unlikely bro- blend,” she reports, “is Bronies, used to refer to male fans of the ‘My Little Pony’ television cartoon and toys.”

And speaking of manly lingo, Old Spice has a new holiday ad campaign that brings back the original “man your man could smell like,” Isaiah Mustafa. As “MANta Claus,” Mustafa promises to buy gifts for all 7 billion people on Earth. See all 36 MANta Claus videos here, and read my February 2010 post on Mustafa’s original work for Old Spice.

Lowering the Bar, the legal blog, reports (in a post titled “Assorted Stupidity #32”) on two new government-project names. PRODIGAL is being developed by Georgia Tech for the Pentagon; the name is an acronym for “Proactive Discovery of Insider Threats Using Graph Analysis and Learning.” (LtB: “Translation: it reads your mail.”) And Palantir is the name of a company that’s working with the CIA on data-mining. LtB: “Nerds like myself will know that palantir is taken from ‘The Lord of the Rings,’ in which a palantir is a crystal-ball-type item that was created with good intentions but virtually always deceived and corrupted the user. And that’s the name they picked.”

“There is nothing inherently disrespectful about Xmas,” writes Dawn McIlvain Stahl at Copyediting.com. “Those who use it are not putting an X where Christ used to be. You could even say that those who use Christmas are putting a Christ where X used to be.”

On the other hand: 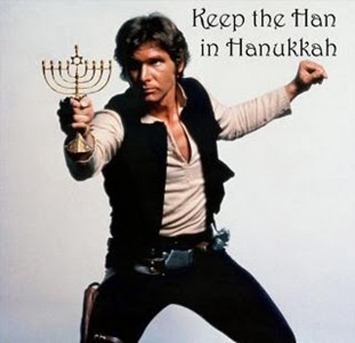 To add to the "bronies" perplexity, there is BroNYCon, a gathering of same in New York next month.

That last image reminds me of Adam Sandler's crowning achievement in show biz, "The Hanukkah Song", I think it's verse two:

"We've got Ann Landers, and her sister Dear Abby. Harrison Ford's a quarter Jewish - not too shabby!"