« Names of the Year: Call for Submissions | Main | Names in the News: Shopycat »

The Cold War is a 20-year-old memory, and only the most reality-challenged zealots believe socialism poses a threat to the United States. And yet it is so hard to let go of the glorious past.

And so, comrades, let us march boldly into the People’s Nostalgia Sector! Let’s see what lies behind the Ironic Curtain. 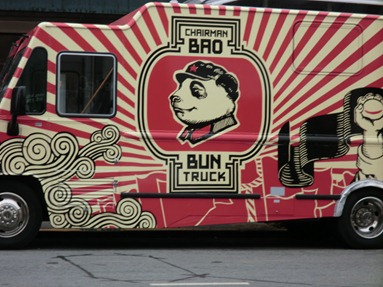 Chairman Bao, above, was my first indication that Communist Chic was becoming a Thing. (Indication? Make that “blaring alarm”: Those graphics are hard to deny.) The bao of the name are steamed, filled buns; the allusion is, of course, to Mao Zedong. The restaurant doesn’t have a website; its Twitter page says Chairman Bao uses “secret recipes from the Little Red Cookbook” and “is leading the Great Culinary Leap Forward.”

Before the truck even got rolling last year, it was hit with a charge of plagiarism: turns out the menu of a New York restaurant called Baohaus features the “Chairman Bao” bun.

You could wash down your Chairman Bao lunch with a bottle of Leninade, the “surprisingly satisfying simple Soviet-style soda” with “a taste worth standing in line for.” It’s made by Real Soda in Portland, Oregon.

The slogans on the bottle mock old Soviet propaganda: “A Party in Every Bottle,” “Get Hammered & Sickled,” “Drink Comrade! Drink! It’s This or the Gulag!” and “Are You Putin Me On?”

Leninade has inspired a surprising number of unofficial videos. See, for example, this one from Claptonhendrix1 and this one from KarlUshanka.

In Detroit, the People’s Pierogi Collective uses socialist-realist graphics to reinforce its claim of being “a revolutionary pierogi phenomenon.”

Lamps designed to resemble Russian streetlights add to the Iron Curtain chic; but it’s a trip to the bathroom, with its stainless-steel toilets and chicken wire separating the stalls, that really makes you feel like you’re back in the U.S.S.R. 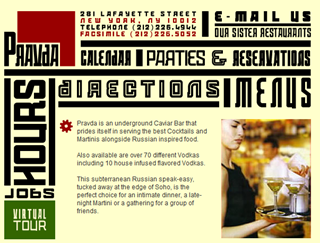 In the Soviet Union, there were two state-approved national newspapers, Pravda, whose name means “truth,” and Izvestia, which means “news.” There was a creaky old joke: “There is no izvestia in Pravda and no pravda in Izvestia.” 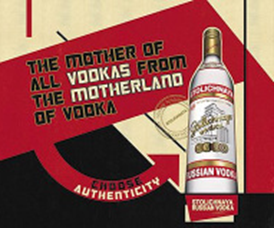 Communism may be dead, but Constructivism lives forever. Here’s to friendship between nations!

UPDATE: Commenter Linnaeus alerted me to Walzwerk, which offers “authentic and unique East German cuisine” in San Francisco’s Mission District. There are framed photos of Marx and Engels on one wall, and the menu is heavy on cabbage and potatoes.

Posted at 09:41 AM in Food and Drink, Humor, In the Wild, Naming, Politics, Slogans and Taglines | Permalink

Is Walzwerk still up in San Francisco?

@Linnaeus: Indeed it is, although I hadn't known about it until I read your comment. I've updated the post accordingly--thanks!

And correct me if I'm wrong, but the copy in that vodka ad is an allusion to something the copywriter probably didn't understand, right? Saddam Hussein promised Bush the Elder "The Mother of All Battles" if the US retaliated for his invasion of Kuwait in, like, 1990. So it's entirely possible a young copywriter may have absorbed that phrase (which apparently goes way back to an Arab victory over Persia in the 7th century) through its subsequent use in culture without ever knowing the usage that brought it into the modern American lexicon.

Just last Christmas, I got a list-writing pad from my mother-in-law - she sends me "cute" list pads from Hallmark and the like for me to make name lists on. At the top of it is a cute cartoon mama cat with a bunch of kittens crawling all over her, and at the top it says, The Mother of All Lists. Amazing how even such apocalyptic, martial language can get tamed and commodified so quickly.

There's also KGB, a bar on East 8th St. in New York. It's in a building that was owned by the Red Ukrainian-American organization--this dates back to the very early 1920's when many ethnic organizations affiliated with the old Socialist Party split into pro-Soviet and anti-Soviet wings. The Communist Party USA used to hold cadre training classes in the 8th St. building, which had meeting rooms upstairs (obligatory portrait of Taras Shevchenko, the national poet, on the wall) and a cafe on the first floor where matronly Ukrainian ladies served lunch to the students and an older guy opened the bar around 5 if anyone wanted a brandy or a vodka to unwind from heavy doses of doctrine. As someone old enough to remember all that, I find sentimental nostalgia understandable and harmless--nobody is going to bring back Stalin or Gus Hall--but the hipster irony of calling the joint KGB makes me uncomfortable.

I peered through the front window of Walzwerk and saw the icons on the wall but the place was closed. Is it any good?

You don't have to be a hoary right-winger to find this a little tasteless. Does Chairman Bao not have access to Wikipedia, which would tell him/them that

"The Great Leap ended in catastrophe, resulting in tens of millions of excess deaths.[2] Estimates of the death toll range from 18 to 46 million,[3][4][5] with estimates by demographic specialists ranging from 18 to 32.5 million.[6] Historian Frank Dikötter asserts that "coercion, terror, and systematic violence were the very foundation of the Great Leap Forward" and it "motivated one of the most deadly mass killings of human history."[7]"

Thanks for the link (a creaky old joke), it's appreciated. As for those who do not like allusions to Soviet Russia, I say get with the pogrom.