« X When You Want It | Main | Word of the Week: Semmelweis Reflex »

Here’s an amusing artifact from the late 20th century: Jargon Watch: A Pocket Dictionary for the Jitterati, by Gareth Branwyn. Published in 1997, it’s a collection of words that originally appeared in Wired magazine’s popular (and continuing) Jargon Watch feature. 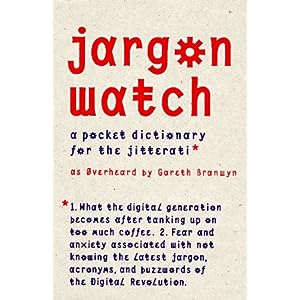 This little dictionary, sturdily bound in chipboard*, captures a fascinating cultural moment when, as the Introduction puts it, “the boundaries between jargon and slang” were “smudged,” and “accelerated cross-pollination” between jargon and slang was occurring “through newsgroups, email, BBSes, Web pages, and trade shows.” To keep up, you needed a pocket-size reference book like Jargon Watch.

Let me set the scene. When the book was published in 1997, Wired was just four years old. The Web as we know it was almost as youthful: Netscape Navigator, then the big name in browsers, was just three years old. There was no Google, no Facebook, no Flickr, no Wikipedia, no YouTube, no Twitter. Mobile phones were rare. There were just a handful of blogs. (Blogger, the first blogging software for non-techies, was founded in 1999.)

So what were the trendy terms between May 1993 and December 1996, the period captured in the book?

Then there are the rest of the words, the linguistic curios and white elephants that remind or enlighten us about the demands, annoyances, and fixations of that not-so-long-ago era, the mid-1990s. Here are some of my favorites:

America Off-Line. “The new nickname for AOL as it struggles to keep up with constant growth spurts and as system slowdown reaches an all-time high.” AOL—now known as Aol.—is a dominant theme in Jargon Watch.

Barney page. “Web page designed to capitalize on a trend (such as Barney bashing). “Have you seen all the macarena Barney pages?” The macarena was a dance fad, children. Barney the purple cartoon dinosaur was introduced in 1992 and is still around.

Bitnik. “Someone who uses a public, coin-operated computer terminal to log onto the Internet.” One of seven “bit” words in the dictionary, all of them obsolete as far as I can tell.

Disk dancers. “People, usually teenagers, who use the free AOL disks given away in magazines and via direct mail to hop from one free account or another, never having to pay to be online.” AOL! Disks! Those were the days.

Graybar land. “The place one goes while staring at a computer that’s slowly processing something (watching the gray progress bar crawl across the screen).” Computers were slow back then.

Kevork. “[After Jack Kevorkian.] To kill something.” The 2011 version is the Kardash, a 72-day unit of time equal to the length of Kim Kardashian’s wedding. (In 14 years, I'm betting this reference will seem as bizarre as “Kevork.”)

Nooksurfer. “Someone who frequents only one or two newsgroups or BBS topics, or just logs on to answer email, never daring to venture out into the big waters of the Net.” A Nook surfer in 2011 would be a different creature altogether.

Port-per-pillow. “The goal of some universities to get network connections into the bedrooms of every student on campus.” Mission accomplished.

Pseudophone. “A pay phone that looks like a real RBOC phone but is owned by a smaller phone company that charges exorbitant fees for long-distance calls.” RBOC = Regional Bell Operating Company. Raise your hand if you can remember the last time you used a pay phone.

Siliwood. “Short for ‘Silicon Hollywood,’ the coming convergence of movies, interactive television, and computers.” Jargon Watch says this term has “become very popular since appearing in the magazine,” but I’ve never heard it.

Umfriend. “A sexual relation of dubious standing. ‘This is Dale, my … um … friend….’”

Many thanks to friend Suzanne Mantell, who buys and sells used and rare books, for the gift of Jargon Watch!

* A note on the typography in Jargon Watch: the quirky display type, with its sprockety Os and double-crossed Ts, is from a font called FF Letter Gothic, designed in 1996 by Susanna Dulkinys. Here’s the current version of the font, updated in 1999.

** Before it was a capitalized and intercapped iPhone feature, facetime just meant “spending time in person with someone mainly known online.”

*** I heard this one from a prospective client just last week.

I'm a bit dubious about how widespread some of these terms really were. As I know from various collections of so-called Microspeak, there are terms that really have currency ... and then there are terms that are cutesy and someone just liked the sound of. One reason for my skepticism is that I lived through this age, up close and personal, which included reading Wired (often on paper), yet a number of these terms I've never heard of. (I don't mean to suggest that I have encyclopedic knowledge of the IT slang of the late 90s, but I was at least there, being snippy about AOL with everyone else, haha.)

Still, there's nothing as fleeting as slang, eh? Except possibly technology.

Mike: The author acknowledges that many of the terms are nonce words: "Many terms come from a certain subcultural orbit and stay there; others are not necessarily practical for everyday usage but were entertaining or illustrative enough to publish anyway. The Jargon Watch column has always been more about entertainment and humor than rigor and lexicographical correctness, more Snigglets than Webster's."

I was interested less in the terms themselves than in the mid-90s Zeitgeist they summon up--an era of pay phones and beepers, AOL and Kevorkian.

I can remember the last time I used a pay phone. It was at an airport several years ago, before I had a cell phone. I didn't have any change, so I used my credit card. The charge didn't show up on my activity for a few weeks, and when it did, I didn't recognize it. It was for about eight bucks (for a call that lasted less than a minute) to some telecom company in Britain. I thought it was fraudulent and cancelled my credit card before I figured it out. Apparently I used a pseudophone.

Ah, yes, good point. In that respect it's along the lines of one of those emails that one gets that say things like "people who graduate from high school this year have never lived without the Web," etc. Payphones indeed. I marvel that they still exist -- altho the last one I've seen is in that vault of technology that's just past its pull date, namely the local library.

Incidentally, "permalancer" is better known around here as "permatemp." My employer settled an extremely expensive lawsuit with a cadre of same, which led to some ... inconveniences associated with trying to hire contractors. Story for another time.

Anyway, thanks for the post and the picture of that lovely typography. (Should you somehow have missed it, I do recommend the book "Just My Type" by Simon Garfield.)

I'm familiar with a different version of "facetime." That's the time you put in at your desk where your boss can see you; when you are present, but not necessarily working, as opposed to time you are working but not present. Companies that still track facetime rather than productivity might be said to be stuck in the 90s.