An original box for a Barbie Go-Together Furniture Kit, circa 1963, is currently on display at the California Design, 1930-1965 exhibit at LACMA.* 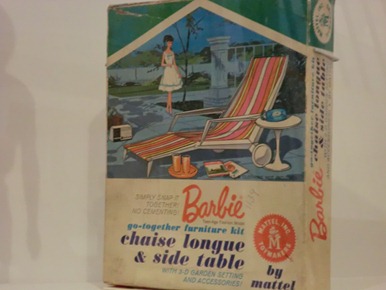 “Chaise longue & side table with 3-D garden setting and accessories!”

Mattel no longer sells this kit, but even if it did, I doubt the seating element would be called a “chaise longue,” which is the correct term. (It’s French for “long chair.”) eBay sellers don’t accept that spelling: they all call it a chaise “lounge,” and so do many other Americans. (In Britain, apparently, the chaise longue is seen only in museums.) In fact, hewing to the correct pronunciation and spelling is liable to tag you as (a) a stickler, (b) a snob, (c) an interior decorator, or (d) French.

But beware the recency illusion: “longue” began shifting to “lounge” at least 150 years ago, according to Michael Quinion of World Wide Words. In his terrific memoir The Life and Times of the Thunderbolt Kid**, Bill Bryson, who was born in 1951, recounts this story from his childhood in Des Moines:

I remember one day my father came in, quite excitedly, with a word written down on a piece of paper.

“What’s this word?” he said to my mother. The word was “chaise longue.”

“Shays lounge,” she said, pronouncing it as all Iowans, perhaps all Americans, did. A chaise longue in those days exclusively signified a type of adjustable patio lounger that had lately become fashionable. They came with a padded cushion that you brought in every night if you thought someone might take them. Our cushion had a coach and four horses galloping across it. It didn’t need to come in at night.

“Shays lounge,” repeated my mother, not to be bullied.

“Well, it’s just ‘long,’” my father said gently, but gave it a Gallic purr: “Shays lohhhnggg,” he repeated. “Isn’t that something? I must have looked at the word a hundred times and I’ve never noticed that it wasn’t lounge.”

“Lawngg,” said my mother marveling slightly. “That’s going to take some getting used to.”

For the record, my family also owned a shays lounge with covers that didn't need to come in at night.

* LACMA is one of more than 60 arts institutions participating in Pacific Standard Time, a fascinating and multifaceted retrospective of Southern California art, architecture, and design from 1945 through 1980. I visited six of the participating museums last weekend: the Huntington, the Norton Simon, the Skirball, the Getty, the Hammer, and LACMA. Pacific Standard Time continues through May 2012.

** Highly recommended. The audiobook, which is read by the author, is especially wonderful: Bryson is as lively a reader as he is a writer.

I saw “Burglar Schmurglar” on a Bay Alarm truck in Oakland: 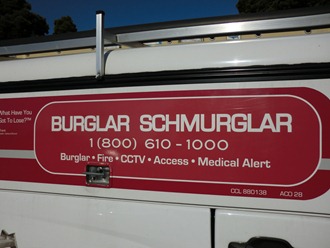 Flickr has the billboard version, with a clearer view of the corporate tagline “What Have You Got to Lose?” The signs are part of a long-running Bay Alarm ad campaign that I commended in a 2009 post. I’m pleased to see that the company has spruced up its web design and content since then.

Libros Schmibros is a lending library and used bookstore that opened in July 2010 in the Boyle Heights neighborhood of East Los Angeles; it's the labor of love of former San Francisco Chronicle book critic David Kipen. I took the photo at the Libros Schmibros temporary residence at the Hammer Museum in Westwood, where it will remain through November 5. 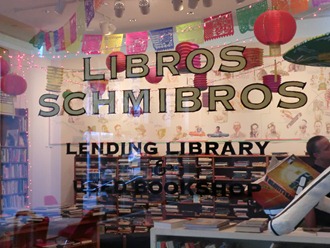 The store’s name reflects its current population (majority Latino) and its heritage (majority Jewish). My father grew up in Boyle Heights during the latter period; it was said that when they started to make money, the immigrant Jews of Los Angeles moved “from BH to BH”—Boyle Heights to Beverly Hills. Westwood lies just west of Beverly Hills.

The reduplicative pattern employed in Burglar Schmurglar and Libros Schmibros usually expresses disdain, disesteem, or a dismissive shrug: “poetry-shmoetry”; “facts-shmacts”; “virus-shmirus.” The formula is “pure Yinglish”—a blend of Yiddish and English—writes Leo Rosten in The Joys of Yinglish. In his entry on “fancy-shmancy,” Rosten says that “the sardonic shm- must have been among the earliest of what linguists call reduplications that was created or embroidered by Lower East Side Jews.” He devotes a separate entry to the particles sh-, shm-, sch-, and schm-, which he says are “solidly entrenched in Yinglish as prefatory expressions of mockery, scorn or derogation.” And he adds an “IMPORTANT NOTE”:

I strongly disapprove of using sch or schm instead of sh for English transliterations of Yiddish words. Sch is German; sh is Yiddish—which, in fact, uses a single letter (shin) for the sh sound. There is no letter for sch in Yiddish. I use the sh and exile the sch wherever possible.

The most famous example of the “x-ing shmx-ing” formula is, of course, the joke about the Jewish man whose psychoanalyst tells him he has an Oedipus complex. The punchline: “Oedipus-Shmoedipus, as long as he loves his mother!”

Posted at 07:50 AM in Advertising, Naming, Slogans and Taglines, Spanish, Yiddish | Permalink | Comments (2)

How to write a naming brief

A couple of years ago I published a post about the importance of writing a naming brief before you start your naming project. I thought I’d said all that needed to be said on the topic, but I continue to get queries that suggest more advice may be needed. So here are detailed guidelines for anyone (a) embarking on a do-it-yourself naming exercise or (b) planning to engage the services of a professional name developer.

Here, for starters, is what a naming brief is not:

Two recommendations as you prepare to dive in:

1. Write the naming brief in the third person, even if it’s for your own company. This will help you take a step back and look objectively, even skeptically, at your own project.

2. If you’ve been using a placeholder name or a code name for your company or product, stop. Now. Instead, use “NewCo” or “NewProduct” or “XYZ” throughout the naming brief to talk about your project.

Got it? Let’s get started.

Continue reading "How to write a naming brief" »