Is it time to rename the beleaguered Euro? The IPKat blog, which covers intellectual-property issues in Europe and the UK, wants your opinion. At this writing, voting is almost evenly divided among Neuro, BizMark, and Tenax (“Latin for frugal, grasping, obstinate and stingy”), but some of the runners-up are pretty clever, too: the Meou (“Memberstate European Operating Unit”), the Markel (a blend of the German mark and “Merkel”), the Ohno (no explanation required). You have till midnight (GMT) Sunday to vote. Via @igornaming.

“Consider Tide detergent, Taizi, whose Chinese characters literally mean ‘gets rid of dirt.’ (Characters are important: the same sound written differently could mean ‘too purple.’)” – “Picking a Brand Name in China Is a Business Itself,” New York Times, November 12. Pinyin News begs to differ: “Nope. The Mandarin name for Tide detergent is Tàizì. On the other hand, ‘too purple’ would be ‘tài zǐ,’ which is close but not the same.” (Hat tip: Ben Zimmer.)

I’m loving Word Soup, the new Wordnik series that covers “strange, obscure, unbelievable (and sometimes NSFW) words” heard on television. A few from the October 28 post: Apparition American (a euphemism for “ghost”), turfucken (“sex with ducks”), and volumptuous (a Snooki-ism that blends “voluptuous” and “lump”). And from November 9: Moneyed American (a euphemism for “rich person”) and jägerbar (a were-bear that hunts). Say, Wordnik, how about turning Word Soup into a book?

Speaking of TV, here in the US we’re impatiently awaiting Season 2 of Downton Abbey, coming to PBS January 8, 2012. In the meantime, Oxford Dictionaries gives us a guide to the language of the series, which is set in England just before and during World War I. No spoilers, thankfully, but plenty of interesting word histories—and some anachronisms, like “when push comes to shove,” which was primarily used in the US until 1958.

A hat tip to the Wordnik Twitter feed for the link to “10 Words You Might Think Came from Science (But Are Really from Science Fiction).” On the list: robotics, zero gravity, blast off.

Speaking of science fiction (not really), the Spaceage Portal of Sentence Discovery is a database of “interesting language patterns and elements,” including figures of speech, grammatical-syntactic structures, and “rhetorical maneuvers.” Search under the “clincher sentences” tag, for example, and read examples by Adam Gopnik, Todd Purdum, and Bill Bryson. Or: “Be of service to the universe by submitting examples that you yourself have discovered.” Fun and very, very useful. Via Sentence First.

Do you believe it’s a cardinal sin to begin a sentence with a conjunction or end a sentence with a preposition? You are, in a word, wrong. Paul Brians, keeper of the indispensable Common Errors in English Usage website, has compiled a list of non-errors: “those usages people keep telling you are wrong but which are actually standard in English.” Included: “over” vs. “more than,” “raise” vs. “rear,” “between vs. among,” and—of course—”hopefully” and “momentarily.” (The late William Safire called these non-errors “incorrections,” a label Language Log has adopted.)

I rarely post links to advice about writing because so much of it is tedious, dumb, or both. J. Maureen Henderson’s “How to Improve Your Writing,” which was published in Forbes last month, is different: it’s smart, practical, and funny. (First tip: “Do more of it. Maybe.” Second tip: “Read more. Possibly.”) The best piece of advice in the column: Edit other people’s work.

Baby Name Wizard went shopping and discovered a nursery’s worth of shoes named Bella, Madison, Chloe, and Olivia. Surprisingly, “there’s almost no relationship between the style of name and the style of shoe.”

Downtown Los Angeles once had streets named Faith, Hope, and Charity. “This last one, Charity Street, was a nonstarter. No one wanted to ‘live on Charity,’ so it was renamed with the grand title of Grand Avenue.” More on L.A. street names in L.A. Downtown News.

Following up on my Tech Jargon of Yore post, here are more than 30 tech ads from that paleolithic era, the 1990s. Despite the weird kerning, this Radio Shack ad made me smile. 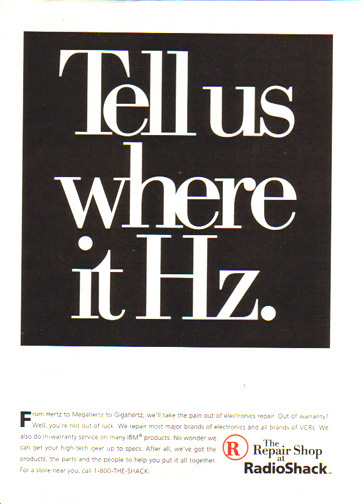 Lots of links to enjoy, thanks!

Do you know the great LA street-name song, "Pico and Sepulveda"?
http://www.youtube.com/watch?v=D98BR1DYrkg

Mention of Chinese detergent reminds me that in Thailand the washing powder Breeze has its name rendered in Thai characters so that it looks like 'Usa'--quite a surprise to see when walking through a shop full of items covered in Thai characters. Here's a picture: http://www.i-nomad.com/2010/09/pseudo-thai.html
There are also some ads for the product on YouTube, but I couldn't quickly track them down.

@Michael: I love that it's called "Thaipography." Thanks for the link!