I spotted this sign last week at the ING Direct outpost* in San Francisco’s Financial District (Post at Kearny): 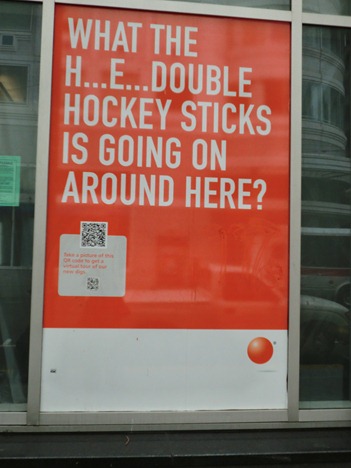 Huh? “H… E… double hockey sticks”? A prissy euphemism for “hell” that I associate with the likes of Ned Flanders? Kind of anachronistic in an invitation to take a photo of a QR code, isn’t it? But maybe stop-you-in-your-tracks incongruity is what ING Direct is, um, banking on.

Of course, if that fails, there’s always shouting. 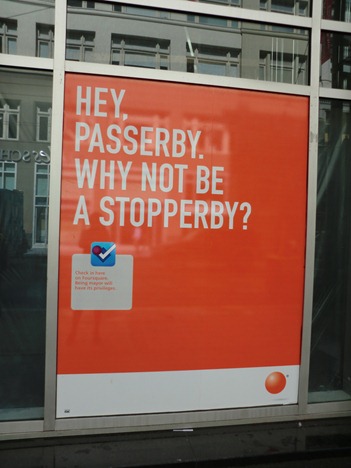 Dear ING: Few things make me less likely to patronize your institution than being addressed as “Hey” before we’ve been introduced. Or after. (When I receive emails from strangers that begin “Hey, Nancy!” I immediately delete them.) As for  “Why not be a stopperby,” I have a limit with cutesy made-up words, and you, ING, just crossed it.

But wait! ING is willing to try another tactic: the Zen koan. 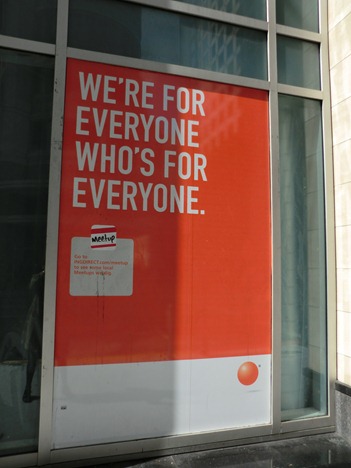 I have absolutely no idea what this means. But hey (!), I’m for it!

Then there’s this “Declaration of Financial Independence” on the corner: 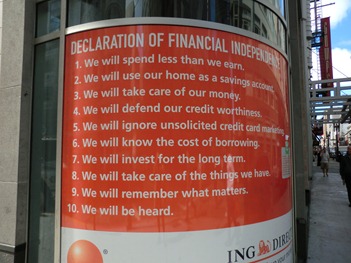 What do you mean “we,” Direct Man?

It’s a manifesto, but not ING’s: it’s intended for “us” passersby. Apparently “we” are supposed to solemnly intone the declaration until we’ve committed it to memory. Because, after all, it was “our” naughtiness that caused the financial mess in 2008, right? Certainly no fault of the financial institutions. Heavens, no.

I wanted to go inside the building and find out more about the signs, but the storefront was locked and vacant. Back in March, ING—the world’s largest direct bank, with US headquarters in Delaware—had announced that the 17,000-square-foot property at Post and Kearny would become an “ING DIRECT [more shouting!] Café” in partnership with Berkeley-based coffee retailer Peet’s Coffee and Tea. From the press release:

The Cafés are designed to educate, inspire and share the values of ING DIRECT by providing a face-to-face and interactive retail experience. In addition to information about ING DIRECT and talking to knowledgeable Associates, the Café will offer free Wi-Fi Internet access and office space for local information technology developers to work. It will also serve as a location for community meetings and events, including local consumer, lifestyle, arts, social and non-profit organizations.

Sounds groovy, doesn’t it? But here we are, nearly seven months later, and all is silent behind the big orange signs. What the H-E-Double-Hockey-Sticks, indeed.

Posted at 09:04 AM in Advertising, Banking, Euphemisms, Signs | Permalink

Another odd "branch" -- Luther Burbank Savings in Santa Rosa has taken over the building that once housed Traverso's deli, and is busy converting it into what their sign says will be their "Headquarters Branch." I didn't think you could have one of those. Does this mean that their other locations will be Branch Branches?

Do you suppose this urge to wordiness is some reaction against the 140 character limit by which so many seem to live their lives these days?

I was thrown off by the ellipses where there should have been hyphens or dashes. My brain kept trying to put three letters into each of those gaps.

My brain was trying to time travel: I associate H-E-double hockey sticks with the 1950s, not with today's frank vocabulary. Why would I trust my money to a bank that doesn't know which decade it is?