« Strikeouts | Main | The Qwikster and the Deadster »

Word of the Week: Humble

Humble: Having a low estimate of one’s importance or worth; lowly; the opposite of proud. From Old French umble (the h was inserted around the 14th century but remained silent in standard English for another 500 years), which came from Latin humil-em (low, lowly, slight). The Latin word is related to humus (earth, soil).

I’m featuring humble this week not because you and I didn’t already know what it means but because it seems to be cropping up in a lot of unexpected places lately.

Ask Siri for nearby Greek restaurants? Bam! 20 Yelp listings are instantly sorted by rating. Ask Siri to read you your texts? No problem, she’s on it. Ask Siri what Siri is?

“I am your humble personal assistant.”

Humble and female: what more could a geeky guy want?

Speaking of geeky guys, last week the Nobel Prize in Chemistry was awarded to Dan Shechtman, a professor of materials science at the Technion-Israel Institute of Technology in Israel, for his discovery of quasicrystals. At a news conference, Dr. Shechtman said:

The main lesson that I have learned over time is that a good scientist is a humble and listening scientist and not one that is sure 100 percent in what he reads in the textbooks.

Humble was also the adjective of choice in Mashable’s October 6 headline about StumbleUpon, the 10-year-old “social web discovery service.”

Also in tech news recently: Humble Bundle (@humble on Twitter), which adds a philanthropic twist to online gaming. (Tagline: “Pay what you want. Support charity. Get awesome games.”) “Humble” was apparently selected only for its near-rhyme with “bundle.”

I spotted another humble in the San Francisco Anthropologie store. Yes, I read everything. 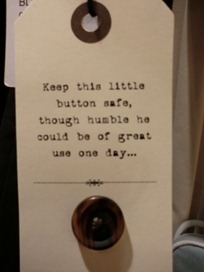 “Though humble…” Hangtag with bad punctuation and line breaks, attached to these Cartonnier pants. (Also: “he”?)

I’d been musing about humble ever since mid-July, when media tycoon Rupert Murdoch appeared before the British Parliament on what he said was “the most humble day of my life.” An Englishman of another century came inevitably to mind. 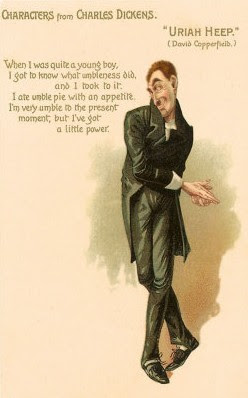 Humble also pops up in the self-mocking #humblebrag, a hashtag appended to any tweet that “masks the brag in a faux-humble guise,” according to comedian Harris Wittels. Wittels compiled a humblebrag Twitter feed that compiles flagrant examples of the genre. (For more on “humblebrag,” see Ben Zimmer’s September 23 Word Routes column.)

Is this enough evidence to support humble as a 2011 Word of the Year candidate? I think so—right alongside swagger. It’s been a year of paradoxen.

P.S. Humble Oil, which was absorbed into Standard Oil (which became Exxon) in the 1950s, was never “humble” in the sense we’re discussing here. The company took its name from Humble, Texas, where it was founded in 1911. The city was named for one of its 19th-century founders, the wonderfully named Pleasant Smith “Plez” Humble.

P.P.S. Also unrelated: “to eat humble pie”: to apologize and face humiliation. That humble comes from a different umble, which comes from French nombles: the innards of a deer, which in the Middle Ages were considered an inferior sort of food. As far as I can tell, nomble is not related to “nom” in the gustatory sense.

Posted at 06:50 AM in Branding, Word of the Year, Words | Permalink

In "The Wire," a secondary character called Little Kevin is arrested on a minor charge, then released; he tells another character he was "picked up on a humble," which seems to be a familiar usage in the milieu of Baltimore drug dealing. New to me.

@rootlesscosmo: I was and am a huge fan of "The Wire," but I'd missed that bit of slang (and probably many others). Thanks!

You look just like an artist I know. Every time I open your page I wonder what Valerie's picture is doing here.

My experience with humble is mostly from Patrick O'Brian where letters are signed with "Your most humble and obedient servant", and are simply the form one must go through when addressing one's superior officers, or peers.

I also get it from English butlers in the movies where they go through the motions of being docile and obedient, whereas in fact they are as unmovable as pillars of stone.