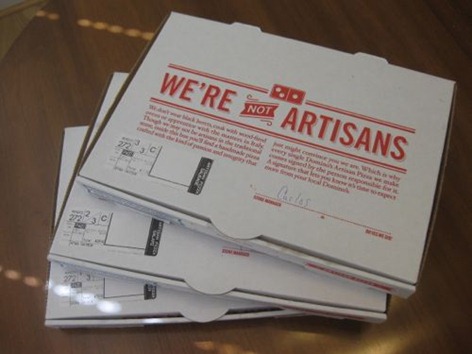 Posted at 07:38 AM in Branding, Food and Drink, Restaurants, Visual Thesaurus, What Does It Mean?, Words | Permalink

I'm noticing lately that everything is described as "artisanal."

Karen: I cover "artisanal" in the column, too. My research shows that it first appeared in print in 1983 in a New York Times story about "earthy, artisanal, sourdough baguette, made according to old-fashioned rules and standards" that "takes seven hours to prepare."

Those rules and standards have relaxed a bit in recent years!

I imagine that the "artisinal grains" you mention in the article have the same general glow that "organic" does in a similar context. Paging William Morris!

You will not be at all surprised to hear that "artisan" and "artisinal" are applied to software, as a quick search will reveal. For software in particular, the literal meaning seems particularly odd, since all software is in effect crafted by hand; try as it might, the software industry has not worked out a way to industrialize its craft.

I noticed the "artisan" term pop up a lot these days; and I notice more that people don't know how to pronounce it. A local radio station had an in-house personality reading promo for Starbucks artisan sandwiches, though he kept saying "artesian" sandwiches. At my local target the other week, I had a lady ask me if I would like a sample of a pizza with an "artesian" crust.

Since I am typing this by hand and on a traditional keyboard that means this comment is artisan.