Items that have caught my attention in recent weeks:

TechCrunch brings news of AngelPad, a mentorship program for web-technology startups. The companies selected for the program receive $20,000 in initial funding and another $100,000 from “two mystery VC firms.” A bunch of businesses have been presenting their pitches this week. Most of their names are boring and amateurish (SourceNinja, Prizzm, IDoneThis). One of the names, however, is baffling and amateurish: Vungle. Ditto the company’s self-description (reproduced verbatim):

The company is based in San Francisco and London, two cities with large populations of fluent English speakers and writers, something you’d never deduce from that copy. (As a result doesn’t result …? Sheesh.)

So I’m guessing the V stands for video and the -ungle has something to do with … jungle? Sorry, but all I’m getting is fungus, fumble, bungle, and linguine alle vongole, with unpleasant overtones of Tungle, a name I still dislike.

In another TechCrunch story I read about another bad name, Adlibrium Dailies, which distributes daily deals through mobile applications. If this name is meant to evoke ad lib (short for ad libitum, Latin for “at one’s pleasure”), it ain’t working, because it sounds exactly like “add Librium,” a very well-known antianxiety drug. (If you click the latter link, you can watch a “phobias slideshow.” Fun!) Adlibrium is brought to you by Camber Tech, itself a not-bad name: camber means an arched surface or a setting of automobile wheels. But the creativity seems to have run out there. Besides Adlibrium, Camber has also developed Snapify (one of too many -ifys; read “A Disturbifying Trend in Namifying”) and Chatisfying, which is even more disturbifying: I originally read it as Chasti-fying (making people chaste?) or Chasten-fying (scolding people?). Even as it’s meant to be read—chat plus satisfying—it’s terrible. Portmanteau names: so tempting, so challenging.

I’ve been enjoying the new HBO series “Enlightened,” starring (and co-created by) Laura Dern, who plays Amy, a volatile, self-destructive, yet somehow sympathetic corporate executive who has a screaming meltdown in the office, submits to mellowing-out therapy, and manages to get herself rehired. The naming tidbit? The company Amy works for is called Abaddon Industries, pronounced in the show with emphasis on the first syllable, something like “Avedon.” The company nameplate is featured prominently on screen, but it didn’t ring any bells with me and it isn’t explained in the episodes I’ve seen. Wall Street Journal culture critic Michael Judge filled me in. Abaddon, he writes, “is the real co-star of ‘Enlightened’”:

The name is taken from Revelation 9:11: “And they had a king over them, which is the angel of the bottomless pit, whose name in the Hebrew tongue is Abaddon...” Our heroine, it becomes clear, aims to slay this corporate beast.

Possibly relevant: The other co-creator of the series, Mike White, is the son of Mel White, an evangelical pastor who ghostwrote the autobiographies of Jerry Falwell, Pat Robertson, and Billy Graham—and then came out as gay, switched to a progressive Christian denomination, and eventually married his partner.

Here’s what a lot of us want to know about Downy UNSTOPABLES, “the in wash [sic] scent booster for clean breeze [sic—why does Downy hate hyphens?] freshness that just won’t quit”: Is the spelling error intentional? Or is it a case of “We know we goofed but the labels were already on the presses so maybe no one will notice,” like Seagate’s “Your On” slogan (reported here in 2007)? Did Procter & Gamble, which owns Downy, spend so much money hiring Amy Sedaris as spokeslaundress that nothing was left in the budget for proofreading?

Don’t believe me? See for yourself. One P. 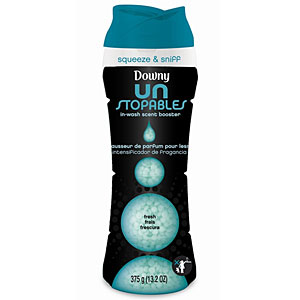 Hat tip to Grammarsnark, and special thanks to Amy Reynaldo for the nudge.

UPDATE: In a comment, J. Fisher provided a link to a response from Procter & Gamble about the spelling of UNSTOPABLES:

I caught a commercial for Unstopables the other night and FREAKED OUT! Illiteracy in our time ...

Your mention of Procter & Gamble reminded me that I dreamed last night that I commented on a misspelling of the name as "Proctor." Yes, I dream in nerd.

Reminds me of the story about a driver who successfully contested a ticket for stopping at a "NO STOPING" sign, by arguing that he had not extracted any ore there.

The sales copy on Vungle was written by Jack Smith. He actually has an undergraduate degree in English Language...

You should also know that he got into the course without knowing what a verb is!

Anyway, in our defence, the new website was uploaded at the last minute before we went on stage.

Have to agree with you. The copy is awful - he will get it changed right away!

A letter said to be from P&G about "unstopable": http://www.jillcataldo.com/node/18788.